Where SHOULD the 2015 Winter Classic take place? 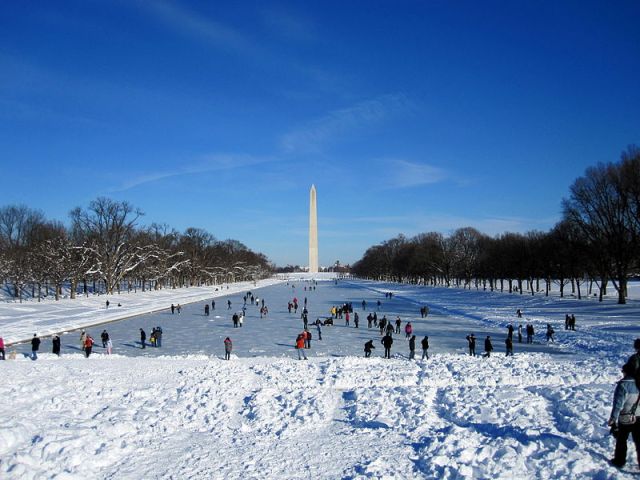 It is finally official!!! After years of promising Ted Leonsis and Co. that Washington D.C. would host the annual Winter Classic, Gary Bettman and the NHL finally awarded the event for 2015. For many Capitals fans, it has been a dream come true as the NHL has promised to award the Winter Classic after being visitors for the 2011 Winter Classic in Pittsburgh. That leads us to this important question? Where should the Winter Classic take place? Some fans have voiced their opinion and Capitals players have let their feelings known as almost all of the venues are obvious choices. I on the other hand have a fascinating choice up my sleeve and I will answer it like the DC Sports Dork should: with a countdown to the best choices for the 2015 Winter Classic.

If you have lived in the DC area long enough, I seriously question your IQ if you feel like this is not an obvious choice for the worst venue for the Winter Classic. But from those from outside the area, I will tell you why this is the last choice. First, FedEx field is not in Washington, D.C.!!! I will repeat, because it is worth repeating after every NFL commercial break from NBC, CBS and FOX cuts to a Washington museum or historical monument and then back to this dump of a stadium. FEDEX FIELD IS NOT IN WASHINGTON, D.C.!!!! The stadium is in Landover, Maryland, surrounded by a disgracefully disorganized parking lot that only Dan Snyder and his minions could organize. It is also at an area where traveling by car is the only way of transportation as the metro is close to a mile away from the stadium.

Speaking of shots of FedEx field, remember when Redskins owner Dan Snyder tore down thousands of seats on the upper deck of the stadium to make a “party deck”? Well, look what happened two years later. This was supposed to be the largest stadium in professional football and now it has hit the league average. There is nothing more disgusting to see every Sunday than seeing what should be a source of prideful piece of local 21st century architecture look nothing short of Dan Snyder’s orgasmic cesspool from hades.

So does any Washingtonian want to, once again, spend a solid hour stuck in horrible traffic inside that god forsaken hellhole and constantly send money over to Mr. Snyder? I mean, what demonic creature could ever team up with this greedy little…oh right. We really are f@#!ed, aren’t we.

You know FedEx Field is such a terrible choice when having the Winter Classic anywhere in Baltimore is a better idea. Since it opened in 1992, Camden Yards has received infinite amount of accolades for bringing back the old-style baseball stadium architecture, to reviving the Inner Harbor neighborhood of the city. Add the fact that the Ravens’ M&T Bank Stadium is across the street from it and fans and league organizers can find multiple ways to host various events such as youth hockey or various other tailgating activities. While FedEx is a stadium that has given people shame in the DC area, Camden Yards has been a source of civic pride in Baltimore. And with the Orioles two year revival period and the Ravens’ success over the last decade, the city has woken up and become a fanbase full of prideful and loyal citizens. As a result, you know they will find a way to put on a good show during the New Year’s spectacle.

The next choice will probably end up being the most sensible one when it is all said and done. Like Camden Yards, Nationals Park has done wonders to revitalize the Southeast part of Washington. Until the unspeakable Navy Yard shooting, Nationals Park also helped make the neighborhood one of the more up and coming areas in the city. However, like FedEx Field, parking is an absolute nightmare and it will be obvious that the only way fans can get into the stadium is through the Metro. This is never a bad thing as many Capitals fans do this in order to get to the Verizon Center every home game. And if you think “lack of charm” will hinder Nationals Park, consider that the modern and average looking Citizens Bank Park was chosen ahead of the higher seating Lincoln Financial Field in 2012 for Philadelphia’s Winter Classic.

Some Caps fans have mentioned how great it would be to host the Winter Classic at the former home of the pre-Dan Snyder owned ‘Skins. Despite it being over 50 years old, full of asbestos and crawling rats, racoons and other various animals all over the place, we need a quote Russ Grimm from the NFL Network’s “Americas Game: 1987 Redskins” to better describe RFK Stadium. “It may be a dump, but it was our dump”. That’s what matters the most, it was OUR dump. I mean, how can you forget moments like these and not envision them in an outdoor hockey game? The stands shaking, plastic seat cushions flying, what more could you ask? Outside of another MLS Cup run from DC United, what better way can RFK Stadium go out on a high note than hosting the most important NHL regular season game of the year?

1. Makeshift Stadium on the Washington Mall

For some of you, once you read this, you would think “Um…no chance. I am not going to waste my tax dollars on such a terrible idea”. I get it and I understand it. I am, after all, a resident near the NATION’S capitol, where opinion and debate go in hand like peas in a pod (or for many politicians on the Capital…erm…hamburgers and freedom fries). But hear me out on this! The Washington Mall is the epicenter of many events that have changed the course in history; from multiple inaugurations to famous speeches. Along with that, the Washington Mall is host to many famous festivals and social gatherings. It is also the perfect venue for recreational activities and to visit many of Washington D.C.’s famous museums and monuments.

So if it is the historical and cultural epicenter of the city, why not have the Winter Classic right in that region? The stadium does not even need to require concrete as they could just use the metal stands used like the ones for the inaugural parade. They could surround either the Sculpture Garden Ice Rink, or the Lincoln Memorial or Capitol reflecting pool when frozen.

Now, this clearly presents problems. First, we have never had any substantial show or wintry weather in two years. If anything Washington DC has been the poster city of signs that global warming exists. Next, wouldn’t you think the seating capacity will either be so small or the installation of a rink and stadium would be so expensive that the ticket prices would skyrocket to such astronomical levels?

This is where the creative and smart side of the NHL figure out how to make the “stadium” from metal stands with as many rows as that of a standard section of an NHL arena. Think of it as the stands that you would see at a local county fair. Also, you don’t need to have those stands as the only seating areas around the makeshift rink. Add some standing room only sections in between the rink and the stands, charge them hundreds to get rid of any potential hooligans and you got yourself a 10-20,000 seat capacity seat venue. Want to go even more over the top, add multiple fan zones and jumbotrons around the mall and get the entire vicinity to near 30-50,000 that way. Finally, let Dan Craig perform his magic and have him rent the reflecting pool of the Lincoln Memorial for a week or two. This should be a hockey extravaganza, ney, a hockey festival around the Washington Mall come New Year’s Day.

Sure, this idea could be kept in Gary Bettman’s head and used as ammunition for how to overprice and oversell how great hosting a Winter Classic would be, but name me any time where a potential of having a makeshift rink could be possible for a Winter Classic. The purpose of the event, after all, is to take players and fans back to the days when they were kids and played pick-up or “shinny” hockey in the great outdoors and winter coats. Isn’t the Washington Mall the closest thing to that definition?

← NHL Trade Value, Part 2
How should we calculate expected points in the NHL? →