Who will win the Pacific Division in 2015? 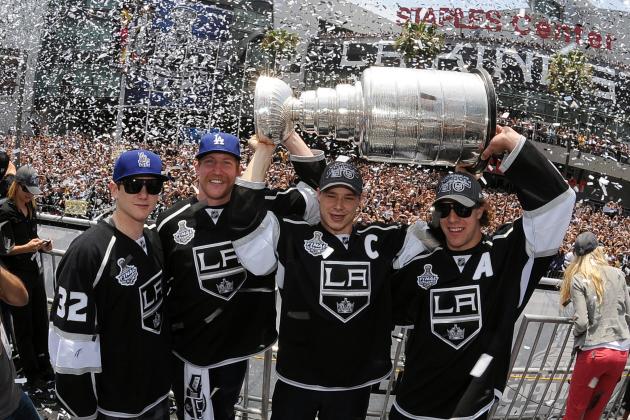 2013 seemed like a sign that the Oilers were finally going to progress into a playoff team. It seemed at first that selling away their prospects and draft picks for veterans last season seemed like a good idea. Instead, it was an absolute disaster. Nail Yakupov regressed in the worst way possible, nobody wants Devan Dubnyk to be a starting goaltender in the NHL anymore and Dallas Eakins might be a bit unqualified for his job as an NHL head coach. Taylor Hall, Ryan Nugent-Hopkins and Jordan Eberle are good enough to form a top-tier first line, but it’s everywhere else on the forward lines that are a concern. Can this summer’s first round pick Leon Drasaitl help out Yakupov and massive overpay Benoit Pouliot on the second line? David Perron and Teddy Purcell are good third line forwards but are Mark Arcobello or Boyd Gordon seriously going to center these two?

In defense, much needed reinforcements are here as Nikita Nikitin and Mark Fayne were added to the blue line. That being said, Andrew Ference is still on the top line while turning 36 in March and Justin Schultz could be the definition of “offensive defenseman that really is a fourth forward”. In goal, Ben Scrivens and Viktor Fasth are immediate upgrades to what Edmonton had at the beginning of last year, but that doesn’t mean they will be seeing less rubber than they did last season. This is the season to prove that Eakins can lead this team forward, otherwise more water bottles will be thrown this season.

Considering how disgusting their roster looked last year, Calgary actually had a really good season under head coach Bob Hartley. It was all lead by captain Mark Giordano, who performed better against top competition than anyone relative to his team in the league last season. That still doesn’t make up for the fact that the rest of the roster is awful, especially up front. Sean Monahan is already the team’s best forward, but he’s not scoring at a historic rate at 19-years old. Johnny Gaudreau should help out this season and Mikael Backlund and Jiri Hudler performed better than expected, but there are still not enough goal scorers. Mason Raymond and Lance Bouma are expected to play on the second line when they are really bottom six forwards by trade. Even Joe Colborne has gone from struggling to make the Toronto Maple Leafs (of all places!!!) to playing third line center. It really stinks to see that Sam Bennett will be out until probably next season from shoulder surgery because Calgary needs any reinforcements they can get.

Troy Bodie is a perfect compliment to Giordano on the blue line, but Dennis Wideman has already become a healthy scratch in the first game of the season. Let’s put it this way, if you have lost your job to Deryk Engelland (the perfect definition of a contract that was used to solely bring the team above the salary floor), that’s never a good thing. Rafael Diaz could be a nice acquisition and Kris Russell had a solid first year with the team, but this is only the makings of a solid to mediocre back end and not one to intimidate anyone in the playoffs. Jonas Hiller should be an upgrade in goal, but one has to wonder whether his time is up for being a starting goaltender in the NHL. The flames should be burned out soon, unless Hartley can pull off some more miracles.

Every year, you would think the Coyotes would fall apart because of their low budget and their lack of star power, but head coach Dave Tippett always finds a way to get the best out of his team. If it wasn’t for poor goaltending and a poor season out of players like Mike Ribeiro, Arizona might have made the playoffs again. Instead, they fell below the 90-point mark in the standings and wonder where they go from here. They did not upgrade much and there are parts to this roster once again that makes you wonder what makes them good the most. Players like Antoine Vermette, Martin Hanzal and even Mikkel Boedker had good seasons last year and should propel the forward line to respectability. One hopes that Martin Erat can be utilized correctly under Tippett and even he can be added to a list of solid two-way forwards on this team. Sam Gagner hopes to replace one productive forward that left in free agency in Radim Vrbata, but Gagner has to improve on the faceoff dot and possession battle.

In defense, Oliver Ekman-Larsson and Zbynek Michalek form a great top-line and Keith Yandle is one of the better “fourth forwards” while being embarrassingly sheltered throughout his entire career. Connor Murphy will get a chance for some NHL experience and expect Brandon Gormley to be promoted soon as well. If Mike Smith can produce at the level he did three seasons ago, the Coyotes can surprise some teams, or else Devan Dubnyk will have to step in after a disastrous season last year. Who knows how far Arizona will go, but under Dave Tippett and GM Don Maloney, I refuse to bet against them.

Anything that could have gone wrong with Vancouver last year, did go wrong for them and it lead to head coach John Tortorella and GM Dave Nonis to lose their jobs. In comes Willie Desjardins and Jim Benning to replace the two, respectively, and plenty of acquisitions were made to return the Canucks into a Cup contender once again. First, they freed up cap space by trading away Jason Garrison and Ryan Kesler on the day of the NHL draft for assets like additional draft picks, Luca Sbisa and Nick Bonino. Next, goaltender Ryan Miller came in to replace the loss of Roberto Luongo during the trade deadline. The last step was signing Radim Vrbata and moving down Alex Burrows down to the second line. Trading for former Los Angeles Kings prospect Linden Vey could be an underrated acquisition as Vancouver hopes to increase their skill up front that lacked so miserably last season. They are still an old team as the Sedin twins will be hitting their age-34 season and Bonino will be forced to produce on the second line. There is also not enough scoring in the bottom pairings, even if your choice of Vey, Zach Kassian, Bo Horvat or Jannik Hansen end up producing better than they usually do.

Even if Garrison was traded, the Canucks should be fine in defense with Dan Hamhuis, Kevin Bieksa, Alex Edler and Chris Tanev. The bottom pairing could use an upgrade, but Miller should be able to cover such deficiencies. I am more optimistic than I probably should be about Vancouver, but I also remember how injured this team was last year and the shot quality just wasn’t their for them as evidenced by their poor PDO and power play efficiency. They still don’t have enough prospects yet and players like Horvat and Jake Virtanen have to step up really soon if Vancouver wants to stay competitive in the long term.

And just like that, Anaheim already looks out of sorts. Yes it is one game, but against Pittsburgh last night, their defense was picked to shreds. The Ducks power play will hopefully be much better this season, but to see Patrick Maroon on the top line and no one else of substantial experience in those conditions just makes me want to throw up. Kyle Palmieri could be on that line, but he is dealing with a high ankle sprain while Dany Heatley is dealing with a minor groin injury. Plus, Matt Beleskey and Devante Smith-Pelly are playing second line minutes? With Ryan Kesler, I like that as a shut down third or fourth line long term, but that is not a good sign for the forwards group if they stay together all season. Surely enough, both Beleskey and Smith-Pelly stayed on the defensive zone and got absolutely shellacked.

Speaking of such actions, Francois Beauchemin hopefully doesn’t remember how old he is. This is going to be important to watch while Bryan Allen is still wondering why he ever deserved to be a healthy scratch and with Shea Theodore waiting in the wings.

The champs are here, and I am still not picking them to win this division, just like last year. Why? Because they haven’t won a division title since 1991. It’s just in LA’s mantra to deal with their flaws in the regular season, make sure the puck possession is in top shape before the playoffs and then dominate April, May and June. Another part of LA’s mantra is to have Jonathan Quick get hurt and have backup X (Martin Jones last year) look like a Vezina Trophy winner.

In all seriousness, Los Angeles should contend for another cup, but they have weaknesses like everyone else. First, when will possession wizard Justin Williams age miserably and can Dustin Brown remember how to rack up points? Second, is this the beginning of the end of Mike Richards being any form of a contributor on a guaranteed Cup contender? Third, will Marian Gaborik’s injury woes continues? Lastly, will Tanner Pearson and Tyler Toffoli continue their playoff success with Jeff Carter or will they go through growing pains? Everything else amongst the forward lines is world class and Darryl Sutter knows how to use them better than any coach in the NHL, but can this team perform well enough to repeat without making any additions to the roster?

With Willie Mitchell gone, Robyn Regehr will be forced to partner with Matt Greene on the second pairing while Brayden McNabb will get some playing time as Jake Muzzin recovers from an upper body injury. When in doubt, Dean Lombardi has been really good at making timely moves that will help improve the team and it’s only April, May and June that Kings care about.

How’s this for a novel concept, hockey media. The Sharks lost a 3-0 series lead to the best possession team in the NHL and the eventual Stanley Cup champions. Match-ups and match-ups alone win playoff series and San Jose, just like St. Louis, find a way to never have the best opposition to play against every postseason. That’s why no changes were made. Yes, Joe Thornton and others lost the letters on their jerseys, but that’s all they are: letters on jerseys. Even if Thornton’s comment of having 23 captains on the roster is flat out cheesy, it is a sound and realistic statement to make. The Sharks still find ways to get younger and almost never skip a beat. Mirco Mueller will now get his chance to play in the NHL as a teenager just like Thomas Hertl did last year. Marc Edouard-Vlasic is now one of the best defenseman in the NHL and Brent Burns returns to the back end where he is suited best.

The only concern maybe how much talent there is up front for the Sharks. Logan Couture, Joe Pavelski and Hertl should be fantastic this season and Thornton and Patrick Marleau should still produce at a high level, but where does it go from here? Matt Nieto and Tommy Wingels still need another full season under their belts to be finally considered NHL veterans and the rest of the lineup seems to be more of the shut-down variety. Were Tyler Kennedy’s numbers in Pittsburgh the exception or the rule? Chris Tierney shockingly made the roster, but is he good enough to stay for a full 82 games or is he just a 10-game call-up? Oh, and should I mention Antti Niemi was terrible last year? Still, San Jose has $4 million in cap space to make any necessary additions and they always finds a way to hit 105+ points every year in the standings and this year should be no exception.