How bad is the Heisman Trophy Curse? 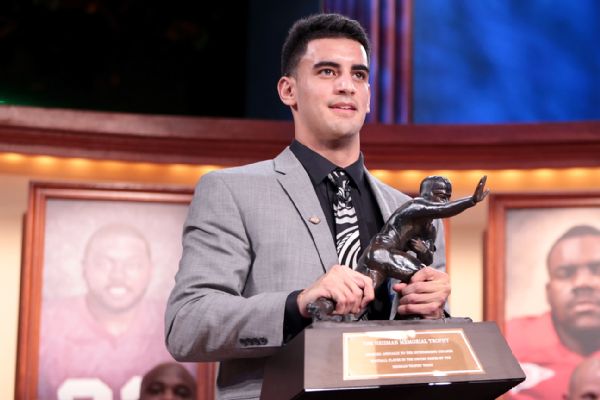 The Heisman Trophy is stupid because almost all of the winners for the best player in college football are terrible when they hit the NFL. That is all.

If I was a more amateur blogger, I would just write those two sentences and be done with it. Instead, I will be diving deeper into the subject and see if the “Heisman Trophy Curse” is genuinely true and just how bad it is. First, let’s get down to basics. The Heisman Trophy was first awarded in 1935 and was originally named the DAC Trophy after the Downtown Athletic Club for the “most valuable player of the East”. In 1936, the trophy was named after John Heisman after his passing where he served as the athletic director of the Athletic Club. Heisman was a former college football player, athletic director and served as a head coach for baseball, basketball and football for various universities.

There have been plenty of issues over the years as to how the trophy was awarded. Since the trophy is always awarded in Downtown New York City and the majority of the voters come from the East Coast, the trophy has always been perceived for anti-Pac 12 bias for it’s lack of Heisman trophy winners from the western-most power conference in the country. Until Tim Tebow in 2007, only Juniors and Seniors were able to win the award. Since then, five of the last eight winners achieved the accomplishment as a freshman or a sophomore.

Lastly, of the now 80 Heisman trophy winners, 74 of them are either a running back (half-backs and fullbacks are included in this exercise) or a quarterback. Charles Woodson is still the only defensive player to ever win the award, three others won it as a wide receiver (Desmond Howard, Tim Brown and Johnny Rodgers) while Leon Hart and Larry Kelly won it as a tight end (or “end” as they were called in 1949 and 1936, respectively). To top this problem off, 13 of the last 15 winners are quarterbacks.

So since wide receivers and defensive backs lack a big enough sample size, quarterbacks and running backs are going to be observed in this analysis. After Marcus Mariota claimed the prize last Saturday, 41 of the 80 Heisman Trophy winners were running backs while 33 of them are quarterbacks. To determine whether or not the Heisman Trophy is a curse, we will be playing with two numbers: approximate value and adjusted games. Approximate value (or AV) is an overall number that is calculated for each football player every season by sports-reference.com. The criteria is different for every position and the details can be seen by clicking this link. Since data collection starts getting fishy with games started and approximate value until 1960, we will only analyze Heisman Trophy winners from that year onwards; still giving us 55 winners to observe.

As you have seen from my previous posts, my definition of a “respectable” career in professional sports is five years worth of games at that level. For NFL football, that is 80 games (you can argue that players that played before the 16-game season (or before 1978) should make that marker at 70 games, but they too will be expected to hit 80 for consistency purposes). However, not every player that plays the same amount of games plays the same amount of plays. For example, some players can hit 80 games by just coming off the bench, and that can’t be equivalent to those that start all 80 of their games. As a result, a guesstimate of playing time is created called “adjusted games”. To calculate adjusted games, simply add all the games a player started by one-quarter of all the games a player did not start. So if a player played 100 games, but only started 60 of them, the amount of adjusted games will be 70. With this new number, we are still looking for heisman trophy winners to hit that number greater than or equal to 80.

Let’s take a look at the QBs. Of the 27 Heisman trophy winners from that position since 1960, only four have been able to play the equivalent of 80 career NFL games: Roger Staubach, Carson Palmer, Jim Plunkett and Vinny Testaverde. Even though it has only been 60 starts, 2010 winner Cam Newton will join the group because he should be able to add to his 60-game career barring injuries (including anything lingering from the back injury Newton suffered from a car accident last week). Still, considering that 13 of the last 15 winners of the Heisman Trophy were quarterbacks, that’s not good.

Until now, Palmer is the only other current player that has played more than 80 adjusted games (so far, he has started 143 out of 144 games). If you are looking for Heisman Trophy winners that are still playing football, Jameis Winson and Mariota are still in college, Sam Bradford has started 49 games while Robert Griffin III has started 33 out of 35 career games and both may no longer be NFL starting quarterbacks. Johnny Manziel just started his first of four games in his rookie season and we all know how that looked.

It is pretty evident on this list that longevity is not a requirement to be a good quarterback. In my childhood, I seriously thought Testaverde was going to do whatever he can to play until he was 50. He didn’t achieve that, but he played more games (214 starts out of 233) than all but John Elway, Dan Marino, Brett Favre, Fran Tarkenton and Peyton Manning. Still, Testaverde was seen as a career journeymen along with Super Bowl champion Jim Plunkett. For Palmer, knee injuries have really hampered a once-promising career. His career totals will prove that he shouldn’t be considered a slouch and the two-time pro bowler almost made a Kurt Warner-esque renaissance with the Arizona Cardinals this year until another knee injury put an end to his season.

Meanwhile, Roger Staubach didn’t play for the Dallas Cowboys until 1969; six full years after playing his final college football game due to fulfilling his military service with the Naval Academy in Vietnam. He would only play 11 seasons, but Staubach played like one of the greatest of all-time at the position during that stretch. “Roger the Dodger” finished in the top ten in career AV per season and only Steve Young has a better AV/adjusted game (1.14) than Staubach’s (1.08).

Now let’s perform the same criteria for running backs. 152 tailbacks, halfbacks and fullbacks would go on to play 80 adjusted games in NFL history.

Still, 80 adjusted games is a huge amount for a running back. Among the top-ten in rushing yards so far this season, only Marshawn Lynch has surpassed the 80-game mark (109.8 so far) while the current leader, DeMarco Murray, has only started 45 out of 50 career games. Billy Sims had the potential to be one of the greatest running backs of his generation, but a terrible knee injury in a 1984 game against Minnesota forced the former number one overall pick to retirement and was only able to start 58 of his 60 career games (but hey, he runs a pretty solid barbecue chain). Steve Owens was another former Oklahoma Sooner turned Detroit Lion that could have had a long career, but chronic knee injuries from 1972 to 1975 forced him to only start 38 out of 53 career games.

Lastly, let’s talk about Mike Garrett. The 1965 winner from Southern California probably should have counted as one that was able to play 80 adjusted games but no AFL data regarding starts for running backs was entered until 1970. Instead of having 39 career professional starts, Garrett could have had as many as 95 at a time when he was among the best players on the Kansas City Chiefs and among the best running backs in the AFL. Instead, I decided to play it safe and not have him on the list of successful NFL players that won the Heisman Trophy. What a bummer! For what it’s worth, Garrett would have been a tier III running back for total AV, adjusted games and AV per adjusted game while being a tier II running back for AV per season.

Still, of all the running backs that successfully played 80 adjusted games, only George Rogers was a below average NFL player in the career total categories. The former single season NFL rookie record holder in rushing yards would retire at 29 after suffering from multiple chronic injuries that he still suffers to this day. Everyone else on the list, however, were not only able to have long-lasting NFL careers, but would go on to be some of the better running backs of their generation. If Reggie Bush is among the weakest links out of that group, that’s not a bad thing to have.

Through this data, it is proof that quarterbacks can’t be trusted from a college-to-pro football adjustment standpoint as other positions. Teams in the NFL could run different schemes as those in college and at the end of the day, some trophy winners just don’t have the physical or mental endurance to last a long time in this league. For running backs, whether it is 1960 or 2015, they seem to have the same general job description as they always had; to carry the football when given to, to be an extra blocker for the quarterback and to be a last-ditch option in the passing game. It is only a matter of avoiding injuries that could become chronic very quickly and playing well with the right franchise and teammates in order for a running back to be successful.

As great as it was to see Mariota win College Football’s biggest prize, one has to wonder if his 219-pound frame will be enough to withstand multiple sacks per NFL season, and that is with the assumption that his offensive line will be decent all the time. Remember, we already wasted months of our livelihoods making the same criticisms towards Bradford (224 pounds) and RG3 (222 pounds) and look where they have ended up so far. For those that are going to make the case about Mariota could just put on a ton of weight easily from now until May, take it from me that has witnessed Evan Royster and Aaron Maybin try to gain a significant amount of weight before the draft within an extremely short amount of time: it almost never works.

In short, life would have been better for Mariota if Melvin Gordon won the Heisman, with or without a crummy Big Ten championship game performance. As for Amari Cooper, he can lean on Tim Brown for having a successful career after winning the award in 1987, but Desmond Howard and Johnny Rodgers never really lived up to their potential either.

Lastly, let’s talk about Charles Woodson. I don’t think people realize that he might be one of the greatest Heisman Trophy winners of all-time. At the very least, the 17-year veteran is the best of my lifetime as no other winner has made more pro bowl (eight) or AP first-team All-Pro appearances (three) since his victory in 1997. Only Barry Sanders can top such accolades in both categories. Only Darrell Green has started more games than Woodsen (258 vs. 233) and his career approximate value is only bettered by Rod Woodsen, Champ Bailey, Ronde Barber, Willie Brown and Green. If that doesn’t force the Heisman Trust to award their trophy to more defensive players, I don’t know what does (Ndamukong Suh is not happy after reading that sentence).