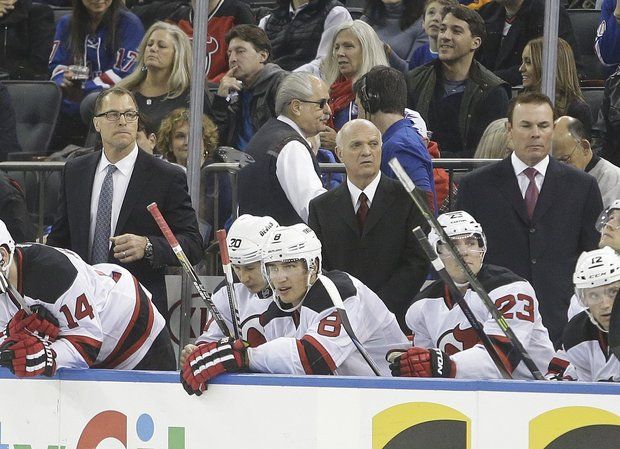 Happy New Year everyone!!! Thank you so much everyone to all those that have read my posts over the last year and I am looking forward to putting out more exciting posts for you all to read in 2015. We get to it with a look at how the league has been doing in 2015 and as the season gets past the holiday break and closer towards the playoffs, two teams decided to fire their head coaches. One team is so bad, that they are scratched out for the rest of the 2015 season in these rankings, while another is hoping that their replacement can save themselves from being eliminated from playoff contention. Those two teams start the latest edition of the Nerdy 30.

The last time I talked about the Devils, they were in a rough stretch since November and Peter Deboer’s team stopped playing defense. Since then, the slump kept going, Deboer was fired and Lou Lamoriello got his typical C. Montgomery Burns on and became…not a head coach? In title, that job was given to two people in Adam Oates and Scott Stevens. Oates will coach the power play and forwards while Stevens will coach the D and Lamoriello is essentially the head administrator that will determine which one wins the proverbial Hunger Games to become next year’s head coach.

I am confused, but hey, New Jersey has gone 3-3-0 since the DeBoer firing. That said, this team is still out-possessed, shot at an unsustainable 12% clip and only beat Philadelphia, Buffalo and a barely healthy Pittsburgh while losing to the Rangers, Canadiens and Red Wings. That’s not an impressive enough stretch to think that New Jersey is turning things around anytime soon. In terms of where they stand in the NHL draft, getting a goal-scoring forward that can play New Jersey’s 200-foot game right away would be my priority and where the Devils are positioned, that should lead to them getting somebody like hipster picking Alum Pavel Zacha (hopefully him and Jaromir Jagr can talk about their hair stories because it would be awesome) or CHL super-prospects Mitch Marner or Dylan Strome.

Is there anything more glorious than watching who the real idiots are in Toronto after something explodes within their hockey team? These two pieces of “work” are the best examples of people who don’t get how you win hockey games and prove that they are part of the problem as to why Toronto haven’t figured it out since 1967. Before you know it, Don Cherry will scream at the top of his lungs that losing out on a Champion like Nick Ritchie instead of William Nylander is the reason why Randy Carlyle got fired as head coach today. Instead, this table and these upcoming tweets should point in the direction of where the Maple Leafs have to go.

That puts them on track to do that 22 times this year, which would be EXACTLY THE SAME AS LAST YEAR’S TEAM

Sean O’Donnell, Chris Pronger and Scott Neidermayer were among the biggest reasons the Ducks won the Stanley Cup in 2007. However, all of them were over 32 years old at the time and were never going to age gracefully. Not a single one would play for the Ducks again beyond 2010 and Jean-Sebastien Giguere would age terribly that season after playing 417 career NHL regular season games beforehand. To make matters worse, Anaheim was never able to draft and develop a young defenceman during Carlyle’s tenure and he let Francois Beauchemin sign somewhere else when he was a free agent in the summer of 2009. When Beauchemin returned in 2011, the defense was never the same and the Ducks are somewhat feeling the after-affects since then.

It’s pretty evident in Carlyle’s career that his best way to cure a struggling team is with more offense, but more offense isn’t enough when you don’t have all four lines being able to produce and when you don’t ever have center line depth. This year’s team is no different and you simply can’t have your top line be the worst puck possession and shot suppressors on the team, time and again. That’s all to having their bottom lines not be able to chip in offensively on a consistent basis. If you can tell me who Toronto’s third and fourth line centers are without looking it up, I will give you $50 because no non-Maple Leafs fan can.

The same problems regarding line inefficiency also apply to everyone on the backend. Stephane Robidas is playing third line minutes, which should not be surprising given that he’ll be 38 in March and that he has come back from a twice-broken leg last year. What is surprising is that he is making $3 million per year until 2017. It should also be an insult to see Carl Gunnarsson being given so little minutes for St. Louis while he was in the top pairing for Toronto last year.

At the end of the day, this team has been poorly constructed for years, but Carlyle believed that playing an open game would be the only solution to outperform the competition and their expectations, and he’s been wrong now for five years. If anyone in the NHL hires a guy that has been that backwards thinking for that long to be their head coach, they deserved to be skewered by all walks of life.

Dallas is back into playoff contention after going 9-3-1 since December 6th and having the second highest score-adjusted puck possession in the Western Conference at 55%. Not only has their offense improved to one of the best in the league without needing an inflated shooting percentage, their defense has finally started to come alive and has performed at a top-ten level. Leading the way is John Klingberg and Jason Demers: two players that were not on Dallas’ opening night roster. Klingberg was a fifth round pick from the 2010 draft that has come out of nowhere to be the ultimate partner for Alex Goligoski since Sergei Gonchar was traded to Montreal. Jason Demers, on the other hand, was traded from San Jose, along with a 2016 3rd round pick for Brandon Dillon. The new additions are examples of not so much finding individual talent, but more of finding the right pieces to a proverbial puzzle are critical to winning hockey games in the salary cap era (are you looking at this Dave Nonis?). In this case, Demers and Jordie Benn have been brilliant together as a third pairing and Klingberg’s development has allowed Trevor “Brooks Orpik’s evil twin” Daley to be paired with Jamie Oleksiak and , at least, improve the shot suppression substantially.

Up front, the Ryan Garbutt-Cody Eakin-Antoine Roussel line is back and is being deployed as a true checking line. What has been interesting is the top line of Tyler Seguin, Jaime Benn and Colton Sceviour is also receiving tough zone starts while the second line of Erik Cole, Jason Spezza and Ales Hemsky have been given all the opportunities to produce offensively. Now, Lindy Ruff’s men have shot at an astronomical 9.7%, has a PDO just below 103.1 and the fourth line has been a hodge-podge of Brett Ritchie feel-good stories and aging veterans that may or may not be a detriment if they play in April. That being said, Valeri Nichushkin has only played four games due to hip and groin injuries, so there is potential for this group to be even better.

After starting the season 6-1-1, the Kings were observed by many in the analytics community as being fake because of their horrendous puck possession. Fast forward two months and they have only gone 13-11-8 since, but are back to being where they should be as one of the best possession teams in the NHL. In fact, they have been number one during that stretch, but have only been able to outscore their opponents by five goals. That is due to their poor PDO and with Jonathan Quick putting up only a league-average save percentage and a wimpy 51.7% quality start percentage. Meanwhile, Martin Jones is fairing a little better at 57.1% quality starts, but is saving even strength shots at a below-league average pace. If anything, Quick’s weakness might be on the penalty kill, where despite having his teammates give up the 11th least amount of shot attempts, he’s only stopping just over 85% of them: good for 23rd out of 30 goaltenders with 100 minutes of penalty killing under their belts and resulting in a less than 80% efficiency. Still, the Kings should be getting the results sooner rather than later.

This is exactly where the Kings teams and management want their opponents to think of them. If the season were over, the Kings would play Anaheim in round one: a team who will, once again, have a young goaltender and very shaky puck possession but skill to mask it. After that, they’ll play another fluky franchise in Vancouver or a partially rebuilding one in San Jose. If this doesn’t show that the Pacific Division is the worst in the NHL, I don’t know what else to tell you and I haven’t had the chance to mention Edmonton, Arizona and Hartley Magic are also in this pile of poop. Let’s just say Los Angeles’ road to a fourth straight conference finals should be an easy one.

← The Washington Capitals have won the Winter Classic. Now What?
Week 14 of the Nerdy 30: Weak storms but Powerful ‘Hawks →