The Roundhouse Kick That Changed Everything 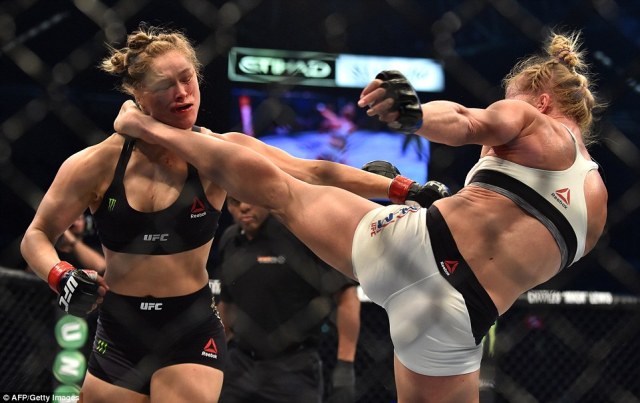 I don’t know how else to explain the feelings that I had when Holly Holm knocked out Ronda Rousey with the most important left-legged round kick in history other than that the world changed. People’s feelings to what they think they know have changed. The standard of excellence has changed. More importantly, who we viewed as the face of women’s sports and modern day feminism, let alone the pioneer and go-to spirit of women’s mixed martial arts, whether it was deserved or not, whether it is something that only one human being must have in one’s shoulder or not, has been completely altered.

First, let’s get micro for a bit. It can not be stated enough how almost no one would have seen that Holm round kick coming if you were in Rousey’s shoes. As Rousey was dropped and tried to get off the ground from a left-handed jab by Holm, Holm shoved her in a way that forced Rousey to look back at her. From Holm’s background as a former boxing champion, you would think that hand techniques would be coming at Rousey. Instead, Rousey felt a left-legged round kick before she could have the chance to realize where Holm is and got hit square in the neck and jaw line so hard that it plummeted her onto the canvas for good. With the way her head bounced almost like a basketball, there was no way she could recover and the rest was history. As Joe Rogan stated in his commentary, Holm came in like a surgeon with her kickboxing techniques while Rousey has always been known as a brawler.

Now, let’s talk about big picture, because there’s so much to talk about, it is guaranteed I’ll unintentionally skip some points of discussion. First, where does Rousey go from here. She was the biggest name in mixed martial arts because she was the most dominant fighter of our time. That being said, she only has 13 MMA fights under her belt with six of them under a UFC fight card in a span of four years and almost eight months, even though almost all of them were against some of the best fighters in her weight class and won’t turn 29 until February. Is there enough of a sample size to prove that she deserves such a moniker?

Let’s put Rousey’s resume into perspective with three of the greatest boxers of all-time: Muhammad Ali, Mike Tyson and Sugar Ray Robinson before they lost their very first professional fight. Yes, Rousey is fighting a discipline that is completely different than boxing, but this is for the sake of pop culture and until the turn of the century, boxing was by far the most popular combat sport in the world. Ali was 31-0 in an 11-year span when he lost to Joe Frazier at 29 years old. However, Ali could have fought more fights if it wasn’t for a three-year ban from boxing for his refusal to be drafted into the military for the Vietnam War. Ali only had two fights after his reinstatement into boxing before his loss to Frazier. Tyson was 37-0 in a four-year and eleven-month long span and was still 23 years old when he lost to Buster Douglas. However, there was talks of Tyson losing his work ethic in training due to a divorce and change in trainers and management; resulting in him fighting only twice in 1989 before fighting Douglas in February 1990. Robinson was 40-0 in a two-year and two-month long span before losing to Jake LaMotta just before turning 23 in 1942 after having an 89-0 record as an amateur. Robinson was one not unwilling to fight those that weighed much heavier or lighter than him since he fought in five different weight classes. In that first fight with LaMotta, Robinson weighed in at 145 pounds while LaMotta was 157.5.

Was that entire paragraph futile still? Probably, but I like to think that it opens up many things. First, it puts into perspective how messed up of a sport boxing was in which you could fight so much against potentially weak overall competition in such little time while. In 2015, there is more precaution towards fighter safety in MMA but with more emphasis of consistently challenging fighters to compete against their level every fight. Add that to the degree of difficulty that MMA contains as many disciplines in combat fighting as possible such as kickboxing, muay thai, wrestling, grabbling and jiu jitsu and the possibility of losing earlier in a fighting career increases.

That all being said, this was Rousey’s fourth fight in nine months at more in the prime of her career than past legends in the fighting world and she working on loads of television appearances, commercials and a Fast and Furious 7 acting gig to go in-between and around all that. Could you argue that in this day and age, Rousey was too distracted, too exhausted and, especially after things got testy in Friday’s weigh-in, Rousey got too cocky (warning: link is NSFW) or too hate-filled? I don’t like to speculate and I think it would be best for Rousey herself, those within Rousey’s camp or with true insider access to tell their side of the story in order to get a true understanding of how Rousey’s sequence of events led to her loss.

This also puts into perspective how the UFC is still a sport that’s so young that Rousey was it’s first true “end-of-discussion” best and most popular athlete only for it to last in such a small period of time. Baseball had to wait over 40 years of organized play until Babe Ruth showed up. Basketball needed 35 years of the professional era until Larry Bird and Magic Johnson permanently had championship games on television. Hockey waited over 30 years until Maurice Richard and the “original six” made the sport eternally stable. Football needed Johnny Unitas to make the game more exciting after over thirty years of over-rugged wilderness at the professional level.

The UFC is still 22 years old and still might need another decade or so for it to fully sort it’s identity, even though the sport has seen it’s popularity grow in such a dramatic fashion and the competition much more aesthetically pleasing. Those inside the sport are witnessing a generation of professional athletes that are solely MMA fighters before turning 20 without ever experiencing any other style of combat sports. How will they turn out when they hit their primes of their careers and will any of them come out unscathed to claim to be the greatest the sport has ever witnessed?

Lastly, I wonder what happens with Holly Holm. She rightfully deserves to be the new women’s UFC Bantamweight Champion. Will she get the same respect and super-stardom as Rousey? In other words, will someone like a 34-year old Holm receive the same attention and fame that Rousey got: a 28-year old that matched her impressive fighting resume with looks that were so popular that she was on the cover of swimsuit issues and health and body magazines everywhere. Is that fair to ask such a thing for any female athlete, let alone someone like Holm? Absolutely not, and it’s certainly sad that we feel like we need to ask such questions in order to continue to wonder if that’s the ONLY thing that drives women’s sports. After all, a generation of sports fans lived in a world where Anna Kournikova was popular for a reason, despite not achieving the amount necessary to ever be considered the best in her sport and that’s just the tip of the iceberg on such a subject.

This is an important year for society witnessing women’s sports. The 1999 U.S. Women’s Soccer Team changed everything, but they never dominated the eyes on the ENTIRETY of their sport. Rousey did and still might if she can bounce back, keep winning fights and maybe even defeat Holm and put her out of her sights in a rematch. Even if Rousey can’t, Holm could stake her claim and finish her UFC career undefeated within the next decade.

But I like to believe that women’s sports can be fine with a bit of parity in 2015. This year’s edition of the U.S. Women’s Soccer Team had to go through feared rivals Japan and Germany in order to reclaim their crown of World Champions. We left that World Cup realizing that there is more talent in world of women’s soccer and that there truly is a lasting impact from the class of ’99. The women’s Strawweight Championship bout also occurred last night with Joanna Jedrzejcyk defending her title in an action-packed fight against valiant challenger Valerie Letourneau. A fight like that is a perfect example that there is more talent than meets the eye in women’s UFC. All I know is that on November 14th, I watched a UFC event with a women’s title on the line as the main event and the entire bar at Union Jack’s in Bethesda decided to shut up and pay attention to history. This is an important moment in sports and society for all kinds of reasons and it is critical that this goes in a positive direction for everyone.

← Week 5 of The Nerdy 30: Tampa’s Troubles and Roy’s Worries
Weeks 6 & 7 of the Nerdy 30: Burned Out Flames and Predators Looking For Prey →