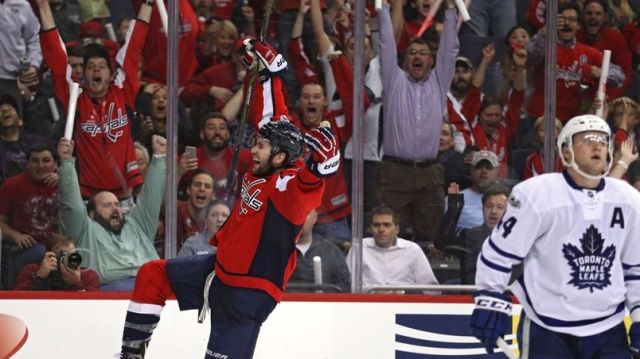 When writing for the Hockey Writers, I tried to build a feature around something I found interesting through a couple of Capitals playoffs games. At the DC Sports Dork, I have decided to expand on this venture and write one narrative on the at least one game every night of the postseason.

Boy do people have opinions on Tom Wilson. Thanks to the massive amounts of television coverage to a first round of an amateur draft for any of America’s four major sports, people who have never watched you play or barely know your story will already try to figure out if your good enough. For Wilson, he was given a somewhat cursed description from the word go: “He’s the Next Milan Lucic”. Already over 210 pounds before he ever turned 18, the former Plymouth Whaler never even averaged a point per game at the CHL level before he was drafted, just like Milan Lucic.

It was an era in the draft where too many analysts wanted to see the league infested with heavy hitters that can score goals on the same shift and most of the time, those guys don’t come around that often. It’s nice to get a Cam Neely, but even Cam Neely broke down. Heck, even Lucic himself had to get out of Boston after his old team realized that giving him a $6 million cap hit was a terrible idea when the goals started to dry up.

Like Lucic, Wilson did start to see his scoring at junior level go up in his Draft+1 season. Like Lucic, Wilson was promoted straight to the NHL level. Unlike Lucic, Wilson has stayed in the fourth line and probably for good. He’s 23 now and has only been able to surpass 20 points in a season once and has never scored more than seven goals in one campaign. Along with that, he only averages just 1.07 shots on goal per game throughout his whole career. So what gives with this guy? Is he overrated?

Probably. But Wilson needs are another 97 regular season games and he would have played five seasons worth of NHL hockey. That is something only 40-50 players do from every draft class. Plus, GM Brian McClellan over payed him by giving him a $2 million per year contract last summer. So if anything, Wilson should have been, realistically, a second round pick at worst. Along with that, have you seen the forward crop from that 2012 draft class? I mean, Nail Yakupov was the number one overall pick!!! Basically, Alex Galchenyuk and Filip Forsberg are keeping that class together with all the Elmer’s glue they can find.

Along with that, Wilson has played a major part in Washington’s revival on the penalty kill since Barry Trotz has taken over as head coach. Since the 2014-15 season, Wilson has played over 297 shorthanded minutes and has only witnessed 92 shot attempts per hour while he’s on the ice. Of the 196 forwards that have played over 200 shorthanded minutes in the last three seasons, Wilson sits 64th in on-ice shot prevention. Plenty of that could be part of the system change that the Capitals coaching staff have placed and plenty of that are other pieces that are getting more time on ice like T.J. Oshie, Justin Williams and Jay Beagle, but make no mistake that the Capitals are this much better without him.

With his overtime winner against Toronto, it marked Wilson’s first playoff goal in 29 games. That shouldn’t start a revelation that is brand new to all of us, and the rest of his stats don’t sit super well with his fellow pugilists. While Wilson leads the entire NHL in penalty minutes since the start of his career at 619, he also is mid-table among the rest of the forward cohort that has committed 328 penalty minutes since the 2013-14 season: the assumed equivalent of averaging a penalty minute per game if every NHL player played in every game. Of those 16 forwards, Wilson only ranks ninth in shot attempt for percentage at 48.6%, 11th in relative shot attempt for percentage at -1.2%, 10th in total point shares from hockey-reference.com at 4.8 and 11th in points per game at 0.22. That being said, his usage on the penalty kill is only surpassed by David Backes, Brad Marchand, Cody McLeod and Antoine Roussel. You would only count on the current Bruins forwards on your PK more than Wilson.

So there you have it. Tom Wilson is not Milan Lucic. He’s not even like Dan Carcillo in terms of infuriating opposing fan bases, looking way too much like Jack White and scoring so many playoff goals in a way that made you forget how awful of a hockey player he was. But we all know that Tom Wilson is the most Tom Wilson Tom Wilson ever. So let the man breath and play the brand of hockey he was meant to play.

Welp, Jake Allen took a game away from the favored Minnesota Wild last Wednesday. Boy are we going to be saying that a lot towards plenty of goaltenders this postseason because hockey games never make any sense all on their own.

Considering that Allen faced over 52 shots and saved all but one, the mass media surely was wondering what Blue head coach Mike Yeo had to say about the fact that his team gave up so much for his goaltender to fend for himself.

Mike Yeo said #MNWild‘s shot total, “will be inflated every game” because Blues allow shots from the outside and try to protect the middle.

Welp, that middle was attacked by the Wild 35 times at even strength in comparison to St. Louis’ 16 according to Natural Stat Trick. Even when you get into the smaller details, Minnesota still had the edge in shooting from the high definition area 10-6 throughout the whole game. Now the Blues did edge those Wild in the third period and overtime in score-adjusted scoring chances 9.76 to 8.22 and in score-adjusted high definition area shot attempts 5.46 to 1.74, but that was still not enough to claim such a big margin of victory for the Wild in terms of shot quality all game.

If anything, Yeo might be experiencing a bit of recency bias when it comes to how outlandish his comment was. But that still doesn’t excuse the fact that his statement was wrong on the whole. The Blues better hope that Game 1 isn’t recreated another three times, at minimum. Because boy would THAT go against the odds.

← 2017 Stanley Cup Conference Quarterfinals Preview
Day 3 of Stanley Quips: What do The Oilers and Office Space Have in Common? →