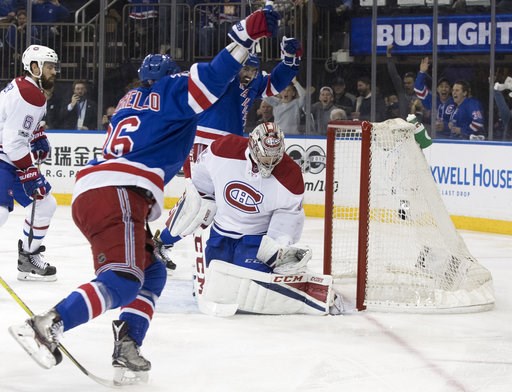 When coming into the Montreal-New York series, the most obvious narrative was that this would be a battle between two of the best and most established goaltenders in Carey Price and Henrik Lundqvist. The two did not disappoint as corsica.hockey expected there to be a combined 33 goals in the six-game series. Instead, there were 25 of them. But if you want to dive further into this series, there is no denying that Montreal was the unluckier team than the always lucky Rangers.

With 18.51 expected goals generated from their shots, the Canadiens should have been able to capitalize more than their 11 times this series. Almost all of the blame has been falling on Max Pacioretty for only recording one assist this postseason, but his 28 shots on goal and 46 total attempts have to be newsworthy as well. There’s no denying that he has been snakebitten for not just this postseason, but virtually his entire career in the playoffs. While he shoots at 11.4% and 3.27 shots per game in 562 career regular season games, Pacioretty’s numbers change to 7.0% while increasing his volume to 3.74 shots per game.

Beyond that, there were two other issues that resulted in Montreal underachieving for the second straight season. The first is the season-long usage of their 22-year old skilled forward Alex Galchenyuk. The former first round pick has had a difficult time developing into his role as a point getter on this team, especially since he recorded career highs across the board the previous season. He did miss 21 games due to injury, but Galchenyuk also had six forwards that played more than 10% of his even strength ice time with him this season. You have to go back to two years ago where you could last find stability with him when he was mostly on a line with Thomas Plekanec and Brendan Gallagher. This postseason was no different where you could see him get playing time with Steve Ott of all people. Instead of alienating your third-leading point getter and your youngest star on the team, why don’t you find a way to get better skilled players around him.

That leads me to the Plekanec line that was bluntly terrible all series. There’s no denying that the 34-year old Czech is not the same as he used to be on the score sheet, but his evolution into a two-way player is what made me convinced that they would shut down the Rangers enough to win the series. Instead, his line with Gallagher and Paul Byron were an abomination as only 45.9% of the shot attempts and 40.9% of the expected goals went in their favor while playing at even strength.

Yes, Andrew Shaw and Alexei Emelin were hurt this series, but those two shouldn’t have been enough to swing the needle here. There just seems to be an extreme lack of skilled forwards on this Canadiens team and the pool just seems to shrink even more for every season. David Desharnais was traded to Edmonton for some reason and it just makes no sense how any cup contender, let alone Montreal, should be giving Byron and Ott any sort of high leverage minutes in the postseason. It should really say something that their best revelation all season was a 30-year old Russian who will be a free agent after this season who was out of the NHL wilderness for five years.

The whole roster just seems to be going stale across the board and unless they find a general manager that can do a better job of constructing a winning hockey team for the long haul, I just really don’t know where the Canadiens go from here beyond a few playoff appearances here and there.