Day 52 of Stanley Quips: The So-Called Death of Corsi 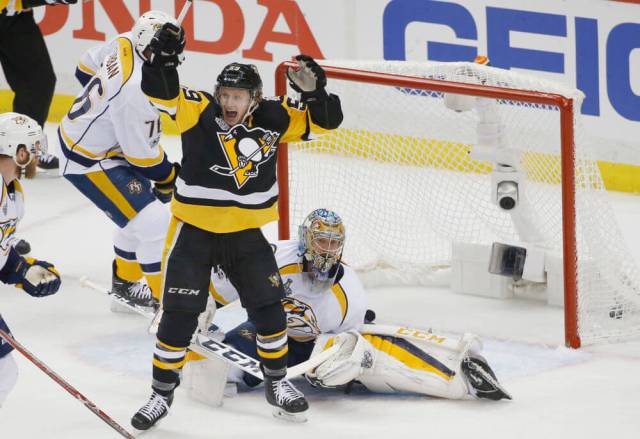 We are only into the third game of the Stanley Cup Finals and already it feels like Nashville are getting no reward for their efforts whatsoever against a maddeningly lucky Pittsburgh Penguins side. Even without Kris Letang and with Sidney Crosby, Patric Hornqvist, Bryan Rust, Matt Murray and Connor Sheary missing some form of postseason playing time, Mike Sullivan’s men are just two wins away from repeating as champions. In the age of “corsi wins championships”, many are wondering if this logic should go away and be replaced back in the good old days in which adjectives that describe how individuals and teams win are the exact same that can be used to describe cartoon characters in Disney Channel or Captain Planet shows. Heart. Determination. Fire in their bellies. Winning mentality. Fighting Spirit. Even the phrase “choking dogs” can be put in these exact same categories.

Either way, people demand an explanation as to what is going on. For starts, let’s get the part out of the way that the Pittsburgh Penguins are genuinely a good team. They were a top five side according to my Nerdy 30 rankings and were tenth in the NHL in event, score and venue-adjusted puck possession according to puckon.net at 51.5%. However, Pittsburgh’s puck possession in the postseason has been absolutely atrocious to the tune of 48.8%. That is only the 11th best rate out of the 16 teams that made it to the postseason.

You may consider that the ranking is just one off the Penguins’ standing during the regular season, but that is with the assumption that the sixteen best teams in puck possession always make the postseason. That is never the case because certain teams every season don’t have the goaltending and shooting talent to match their efforts. That’s what happened to Los Angeles, Philadelphia, Carolina and Tampa Bay this time around despite having better puck possession than Pittsburgh.

Even if the Pens’ puck possession is bad, it is important to also take into account of who they have been playing in the postseason to get them to that porous number. Thanks to their five-game series with Columbus, a seven-game roller coaster ride with arch rivals Washington, another seven-game thriller with overachievers Ottawa and now this series with Nashville, Pittsburgh’s average puck possession of their opponents has been 51.7%. That looks decent, but that’s certainly not enough to compensate for Pittsburgh’s bad shot dictation.

Despite generating an impressive 54.3% puck possession in the playoffs, Nashville still had an 11th best ratio of 51.4% during the regular season and its quality of competition during this spring was still 51.1%. We’re talking tenths of percentage points, but the point being here is that whoever wins the Stanley Cup will be one of the worst Champions since the 2005-06 lockout.

Now the real question is that whether we should stop paying attention to puck possession and using that as a tool in determining who should win hockey games. The answer based on this season’s graphs is a definite no. With a coefficient of determination above 64%.

When you look at every season puckon.net has recorded, every data point comparing puck possession and regular season performance always finds a way to be positive with a minimum linear slope of at least 1.93. 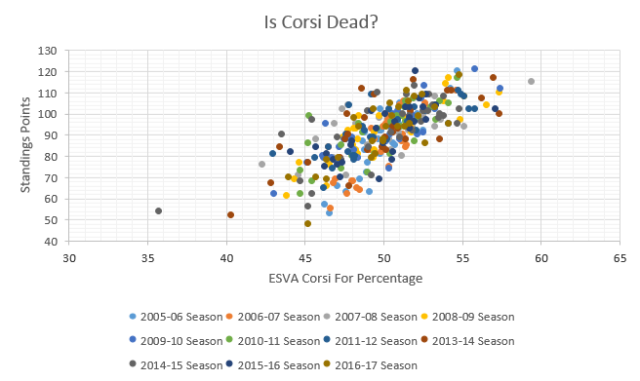 When it comes to playoff performances, that’s always going to be different. Within such small sample sizes teams can put up all the shot totals in the world, but if they underachieve or their opponents overachieve with their shooting, playoff series swings in the under-performing team’s favor. Just look at the Minnesota Wild and the Washington Capitals this year. Meanwhile, also look at the Pittsburgh Penguins and Nashville Predators, who are the league leaders in postseason PDO in the playoffs.If you are looking for as good and as recent of a replica as this year’s playoffs, look no further than 2011-12 when the eighth seeded Los Angeles Kings won the Stanley Cup while four of the five other teams ahead of them in regular season puck possession could not make it out of the first round. Still, those Kings were just 1.7% away from leading the league in puck possession instead of the league-leaders Detroit. Pittsburgh were 3.2% away from league leaders Washington this year.

With all that, this will still be just the third time in 12 years a team outside the top six in regular season puck possession will win the Stanley Cup without being in the top six in puck possession and will just be the fourth time a Stanley Cup champion has faced quality of competition below 52% puck possession. The only time both markers have been hit were….those 2005-06 Carolina Hurricanes when they were the sixth seed in the Eastern Conference and had to beat the eighth seeded Edmonton Oilers in the finals. 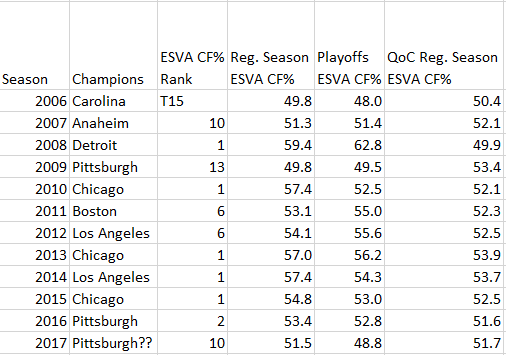 In my opinion, this season is a sign that a changing of the guard is happening across this NHL. Maybe Pittsburgh is the ultimate bridge in this alteration, but teams like Chicago and Los Angeles are clearly going away while the likes of Toronto and Edmonton are rising. Anaheim, St. Louis, Minnesota, Washington and the New York Rangers are also not getting any younger anytime soon. 2017 onward will see a new landscape in hockey as the best rookie class in a long while will start to stake claim to who owns the league, but until then, this Stanley Cup Final belongs to two teams that have just so happened to grasp the moment, take advantage to an easy and/or unlucky slate of opponents and have taken their opportunity towards glory.