First Three Weeks of the Nerdy 30+1: Chayka Checked Off and Advocating Devils 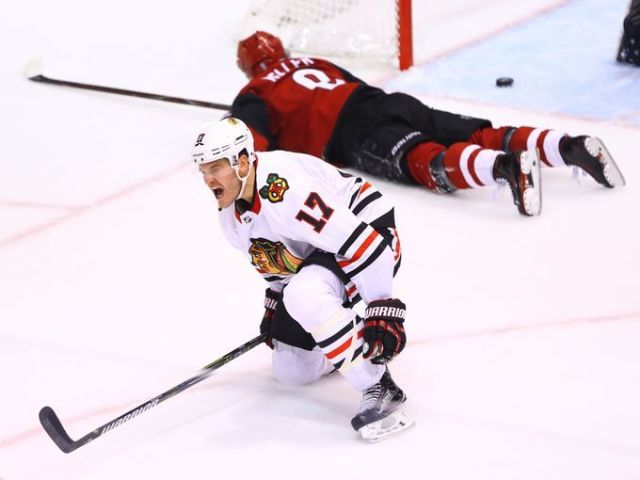 I’ll be honest, I clearly haven’t been looking forward to this NHL season, and with good reason. If anything, last night’s 6-2 drubbing Vancouver unleashed upon my Washington Capitals is proof to why I’ve been so pessimistic since the team lost Nate Schmidt in the expansion draft. Add the fact the Nats now seem to be on the wrong end of managers who find so many unique ways to snatch defeat in the jaws of victory as well as one too many bad umpiring decisions, and I just have no idea why I should even watch sports anymore.

Even the inevitable Ohio State loss is making me cringe about the idea of wanting to enjoy the most fun Penn State football team I have ever seen. If anything, I just want Marcus Allen to stay happy forever.

Then came #RITHAC where so many great minds in the hockey analytics community came together and presented the latest innovative ideas. I was so glad to catch with so many people I have been able to connect over the years and it got me inspired to write about hockey again in a positive way.

I may not be able to write nice things about my Capitals for another decade or century, but at least I can try to find a way to enjoy sports again. With that in mind, let’s get on to the first edition of the Nerdy….wait a minute there are 31 teams now?!

Yes, my friends. We need a new title to incorporate having Vegas as our 31st team in the NHL. I think adding a mathematical twist is a good way to do it. Other than that, there are no changes when it comes to how I rank the teams. I used the same method used by the Washington Post’s Neil Greenberg as to how he performed his power rankings from a few years ago, except I use adjusted all-situations expected goals for percentage from corsica.hockey instead of close-score shot attempts for percentage.

Since everyone has played more than one-fourteenth of the season, a team has to be eliminated from the power rankings so it can be deemed too abominable to watch. Now, without further ado, here is the first edition of the Nerdy 30+1(!) for the 2017-18 season.

Anytime you start the year with just one overtime loss to Vegas in ten games is enough to be knocked out of the power rankings this year. Like last year, Arizona is just a miserable franchise and they need to be put out of their misery as soon as possible. When previewing them this season, I mentioned that the Coyotes would at least be fun because of the vast amount of under-23-year-old players hoping to make a name for themselves in the NHL. Some are hitting those strides.

The top line of Clayton Keller, Max Domi and veteran Derek Stepan has been their bedrock with the 19-year old Keller leading the way with 11 points in 10 games. While having the worst plus-minus on the team, Oliver Ekman-Larsson continues to be a star from a puck possession standpoint and even Luke Schenn has been a  net positive on the back end. Along with that, Anthony Duclair seems back to his old self to start the season with five points of his own.

That’s where all the positivity ends as the Coyotes are starting the year as the worst defensive team in the NHL from a goals against standpoint. In goal, you know it’s bad when you have to throw 21-year old Adin Hill into the fire so early in his development. Hill may end up being a great goaltender, but his time just isn’t now just yet. Beyond that, Antti Raanta and Louis Domingue just haven’t shaken off the “career backup” labels that they currently have. Somebody has to hold on to that job for more than 50 games just to make the Coyotes look competent on that end, let alone good.

Look, not every NHL first round pick is going to work out. Still, this is the fourth overall pick from 2015 and the 12th overall pick in 2014. Instead of Perlini, Arizona could have had Dylan Larkin or Robbie Fabbri. Also, only Timo Meier has played less than 50 games among players taken eight spots ahead of Strome. Now the Coyotes have two well-regarded prospects at junior level who can’t even play more than four games and perform above 40% puck possession this season.

At the end of the day, everyone and their mama knew the Coyotes were going to be bad. Bluntly, I’d keep playing Perlini and Strome so that they can hit 70 games. If they’re intimidated, well, tough poop. I need to do something to get my fan base happy and those two are a part of that happiness. When in doubt, my chances of winning the 2018 draft lottery will still be high. Instead, we’re going to get third lines featuring not Argentina soccer legend Mario Kempe and this bozo. Great start to your coaching tenure, ha Rick Tocchet!

Yes, Avalanche fans! This year’s rendition of your favorite team is kinda solid. They are 5-4-0 to start the year and almost every best-case scenario situation for every player is happening. Semyon Varlamov is back to his best with a 66.7% quality start percentage and a 92.9% save percentage. Matt Duchene and Tyson Barrie are leading the team in scoring with a solid 8 points each in nine games. Mikko Rantanen is not that far behind as he finally shows what teams were missing when he only went tenth overall in the 2015 draft. Also, Sven Andrighetto, Gabriel Landeskog, Nathan Mackinnon and Nail Yakupov are providing positive contributions on the offensive end. Even some dude named Alexander Kerfoot has made a positive impact. And the offense can get even better thanks to a shooting percentage that just has to get better than a seventh-worse 7.34% at even strength.

Sadly, I don’t think this marriage of winning and continued poor analytics is going to last. This season’s 47.3% share in expected goals and 48.2% share in shot attempts is nowhere near as bad is it was last season. Still, that doesn’t excuse the fact that the reasons for the current success of this team aren’t going to be sustainable. Also, both power play and penalty kill success rates are starting the season below league average. At the very least, Colorado has the skill up front to be able to score goals on the man-advantage.

Whether you look up natural stat trick or Corsica, both sites indicate that the NHL as a whole is generating more shot attempts per 60 minutes to start the season than the whole of last season. That being said, it doesn’t excuse the fact that with the offensive firepower they have had, Jared Bednar’s teams have stayed as a bottom ten unit in offensive shot attempt output. Getting better could make the Avalanche finally breakout into the team they have been wanting to have since that magical 2013-14 season. With a Central Division that has seen plenty of change around them over the years, somebody has got to stake ownership to it.

Guess what! The Vegas Golden Knights are not as bad as you think they may be. Whether or not their twitter handle is of the same reputation can be led by your own interpretation. Still, in the first eight games of the franchise’s existence, they have only lost once in regulation. The real question, of course, is if any of this can last beyond this month. The answer a definite no.

Even if Vegas finds a way to make the playoffs because the Western Conference is seriously that bad, there is no way any NHL team, let alone Vegas, is able to sustain a 144-point pace in the standings. That being said, it still looks quite difficult for the Golden Knights to even make it to 90 with the way they play. In both shot attempts and expected goals, Gerard Gallant’s band of misfits stand as the eighth worst in both categories. However, they are where they are thanks to a 103.1 PDO that is just too high to stay this good.

Having such a strong puck luck comes from the performances of Marc-Andre Fleury who just doesn’t want the 2017 Stanley Cup playoffs performance levels to end at all. Sadly, he’s on the mend due to a concussion he sustained in the 3-1 win against Boston. Malcolm Subban and Oscar Dansk have more than made up for his loss and have exceeded expectations, but both of these young goalies can’t stay this hot forever. Also, you know the on-ice shooting percentage is off the charts when Luca Sbisa is starting the season with five assists: all within even strength.

James Neal is easily the team’s most lethal weapon and will continue to be when this season is all said and done. That being said, who else is going to carry Vegas on the offensive end? I like Reilly Smith and Jonathan Marchessault to pitch in and you all know about my never-ending love affair towards Nate Schmidt. There’s just a whole lot of question marks from here on out. Whether those questions become answers is what determine’s Vegas’ fate. Until then, we just have to continue to watch the rest of this franchise’s recent history.

Among all the teams in the top eight of this week’s power rankings, there is no team that is more surprising than the New Jersey Devils. John Hynes has finally got a team that is finally getting better and are playing to a different tune than those of Devils team’s past. For starts, they actually have the 13th highest total of shot attempts go for and against them at even strength this season. That is shocking considering that any team that has a touch of Lou Lamoriello’s fingerprints on it usually is in the bottom five in that category. Now that general manager Ray Shero has more than a full offseason to operate the Devils, he can finally place his own identity onto the on-ice product and it is finally beginning to show.

With the acquisitions of Marcus Johansson and Will Butcher, plus the draft pick selections of Nico Hischier and Jesper Blatt, New Jersey is a much younger and much faster team. Taylor Hall finally has the space to roam on the ice and generate offense from wherever he wants and Adam Henrique and Kyle Palmieri continute to contribute in the goal scoring department.

That being said, the Devils have been giving up plenty of chances on the other end and if it wasn’t for their 103.5 PDO, they probably wouldn’t have such a strong goal differential to start the year. Along with that, their penalty kill has already put up three shorthanded goals this season. Even Keith Kinkaid is outplaying Corey Schneider in goal to start the season.

Maybe there are too many things about New Jersey that isn’t going to last. At the very least, they aren’t going to be boring anymore and that within itself is great news. In fact, they will be among the many teams that are proof of just how unpredictable this 2017-18 season will be. All the favorites haven’t really been showing how good they are as contenders just yet and there hasn’t been one standout team that has used shot attempts to prove why they are so good. Good thing it is only October.