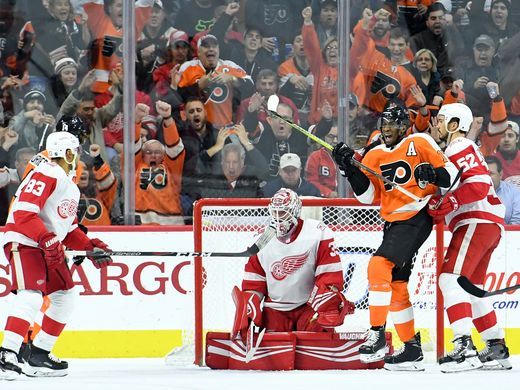 Within the span of a week, every team in the NHL has played over 33 games, also known as 40% of the season. Since the league has surpassed another one-15th slice of the NHL schedule, another team has to be eliminated from playoff contention.

Among the first observations when looking at this season as a whole is that there seems to be little to no ELITE NHL teams while there will be a log jam of bad teams. This week, there is definitely evidence that the NHL will be run by two divisions: the Metropolitan and the Central divisions. Whether any of them will be host to this year’s Stanley Cup champion is anyone’s guess. However, evidence of how much of a chasm the divisions are is by the fact that today will be the day we eliminate a FIFTH Atlantic Division team from these power rankings.

In short, we’re over 33 games in and we already expect the Metropolitan Division to have five teams in the playoffs and we know EXACTLY the three teams from the Atlantic Division that will join them. It genuinely has been that bad for the Northeast…and Florida. I guess that’s what you get when the majority of your general managers and owners are incompetent and make the most detrimental transactions. On that note, let’s unwrap the inevitable as the Detroit Red Wings have been sacrificed in this week’s edition of the Nerdy 30+1.

Even though Detroit have won two of their last three games, it is finally time to put them out of their misery. If you were to take their latest run of form, they were just trying to get themselves back up after winning just once in 11 games. When I last wrote about them, I did bring up about how they were a competitive team but just lack the level of at-their-prime talent and depth necessary to compete in the playoffs throughout the entirety of the lineup. Nothing is different as of today.

That being said, Detroit’s puck possession has improved to 49.2%, but plenty of that is due to how their elite defense (6th best in the NHL at 55.3 even strength shot attempts per hour) has compensated their horrendous attack (3rd worst in the NHL at 53.6 attempts per hour at even strength). If anything, shot rates this low in relation to the league are making the once quick and athletic Red Wings switch places with the New Jersey Devils when it comes to style of play. It will be fascinating to see if head coach Jeff Blashill and general manager Ken Holland continue to keep this trend going because this is definitely a foreign concept to anyone that has followed Detroit over the years.

Still, the team is developing some positive aspects to the way they play. Their penalty kill isn’t, well, killing them all that much with a roughly league-average 80.9% efficiency and their power play success rate of 22% is better than most teams in the NHL. If they could ever get anyone in goal hitting a hot streak, their PDO of 98.7 won’t be such a detriment. Considering how much of a disgrace the Atlantic Division is from top to bottom, I won’t write off seeing them get more towards an 85-95 point season. Whether that happens this year is anyone’s guess.

Just when you thought the Islanders were in a positive place, they have gone 3-6-2 this month and have been outscored 49-31. Defense and goaltending is clearly the first of the team’s problems considering that they have only given up two goals or less only once during their run of bad form. It’s no secret how mediocre Jaroslav Halak is right now, but to see Thomas Greiss to perform just as poorly as him is very alarming for head coach Doug Weight and his team.

But if it wasn’t for Brooklyn’s 8.97% shooting percentage this month, their fifth worst attack at even strength during their span would really put this team through the gutter. As mentioned before, if you take the Islanders’ top six forwards out of the equation, the Islanders seriously lack talent within the bottom six. Plenty of that is lack of goal scoring, but lots of it is also poor use of resources over the years.

It doesn’t matter what reputations they had in the past: whenever you spend over $11 million combined on three forwards, you demand better performances than a combined 23 points in 74 games this season. Yet that’s what Brooklyn is getting out of Nikolai Kulemin, Casey Cizikas and Cal Clutterbuck. Jack Capuano lost his job because none of those three were able to generate offense for his team when the Ryan Strome’s and Andrew Ladd’s were struggling to get on the score sheet. If anything, Garth Snow should be watching his back because he is the one that is spoon feeding his coaches this lack in talent and value.

Down on the farm, the Islanders have been great in that department and I personally want to see them use Anthony Bauvillier, Matthew Barzal and Josh Ho-Sang significantly more. Otherwise, Brooklyn might as well give up on the season again and accept that John Tavares doesn’t want to play for a franchise that isn’t creative enough to win. That’s how Tampa Bay, Chicago and Pittsburgh are when they are at their best. If the Islanders want to reach that class, they better change things up quick.

In a season in which no one in the Pacific Division wants to claim the division title, you would think the Calgary Flames would happily oblige in being top of the standings. Instead, they are sitting in the outside of the Western Conference playoff picture and just haven’t been able to take their game up a notch. At even strength, Calgary actually has the 3rd best attack in the entire league at almost 64 shot attempts per hour. But thanks to a 6.95% shooting percentage and even worse production on the power play, the Flames are just a mid-table team in goal scoring.

Nothing has really changed for the Flames up front. The “3Ms” line of Matthew Tkachuk, Michael Frolik and Mikael Backlund is once again leaders in the clubhouse as the best two-way forward line in the entire league. Meanwhile, Johnny Gaudreau is having the best season in his entire career with 40 points and 54.0% puck possession in 35 games. But none of this joyful news is shedding any of Calgary’s flaws this season.

Consider that the Flames have not scored more than one power play goal in a single game this month and have only scored five times in 50 attempts during that span. While their penalty kill has improved by putting an end to 43 of their oppositions last 50 attempts, that is just not enough to balance out the fact that the they are just simply not being able to score goals at the moment. Jaromir Jagr and Kris Versteeg have been on injured reserve, but that still doesn’t excuse the fact that, like the Islanders, the Flames lack talent along the rest of the forward groups. Predictably, Troy Brouwer has been awful with just nine points in 35 games and Matt Stajan and Curtis Lazar have been utter disasters with a combined two points in 49 games this season.

While the Flames could make a push at the trade deadline, you do have to wonder what they would give up to improve the roster. Thanks to the Travis Hamonic trade that is looking ugly for them by the month, Calgary’s highest draft pick in 2018 is their own third round pick. The Flames do have plenty of forwards on the last years of their contract, but beyond a trade that is so one-sided for them, I don’t understand why they would want to get rid of players when they really should be adding. This has been an odd season for Calgary and maybe their shooting will get better just enough come playoff time. Until then, my doubts are really beginning to creep in for this team.

Ideally, Boston would be lauded to the gills because their hot streak up towards the top of the Atlantic Division has been remarkable. Instead, I’m going to write about the team that seems to have everything they need for a Stanley Cup title-level push, but just hasn’t played like it this season. Things don’t help when their best player in Auston Matthews has been hurt since December 10th with a hand injury and then the team has lost four of five games since. However, the Toronto Maple Leafs just haven’t hit a point where they can call themselves and elite team at even strength this season. While their defense is 20th in shot attempt prevention, that is not new news to see them perform at that level. If anything, it’s the offense we expect to really hit a mark that the rest of the sport should be fearful of.

Instead, Toronto is 12th in the NHL in shot generation at 59.5 attempts per hour. Even with Matthews out, that number has increased to 60.1 attempts per hour, so this is a more systemic issue than expected. Whether it is the league finding better ways to generate offense in this wacky 2017-18 season or not, Toronto just isn’t able to be the outlier like they were last season. Even while staying at league average, they have been able to score the third highest tally of goals in the NHL in all situations with 119. Plenty of that has to do with their league-leading 9.6% 5-on-5 shooting, but that number has begun to plummet at 6.1% since Matthews has been on the shelf. While I do expect Toronto to bounce back, I do think more regression to the mean will happen whenever Matthews comes back as well.

Thus, are the Maple Leafs prepared to change their team or their tactics once the league has figured out who they are? For some reason, the third line of Leo Komarov, Nazem Kadri and Patrick Marleau just hasn’t gelled at all this season. As a result, trade rumors have been flying for James Van Riemsdyk so that Marleau can play with better players and improve on his 12 goals and 19 points in 36 games. Add in the fact that “JVR” is on the last year of his contract and it all makes sense. However, it’s just odd to trade away a 28-year old so that a 36-year old can be in a better situation.

I would like to see Toronto think the other way and try to trade Komarov instead. But at 31 and with his numbers scoring numbers dwindling, it looks difficult beyond belief that somebody would want him in return for better value going the other way. No matter how this is observed, it goes to show the difficulties Toronto are in to make their team better while Matthews, Mitch Marner and William Nylander are on their rookie contracts and are breaking out into the stars that they are. Draft picks could be involved considering they do have a surplus from the Rafi Torres and Alex Stalock-Ben Smith trades from previous seasons. However, little should be expected to go in return and Toronto is already well beyond their salary cap limit.

I personally think Toronto will be fine for the playoffs and they should present a stronger challenge than last season when it comes to contending for the Cup. However, they are more like Washington than they are Pittsburgh when it comes to confidence and the construction of their roster right now.