Week 26 of the Nerdy 30+1: Carlyle’s Curiosity and Sulking with Sullivan 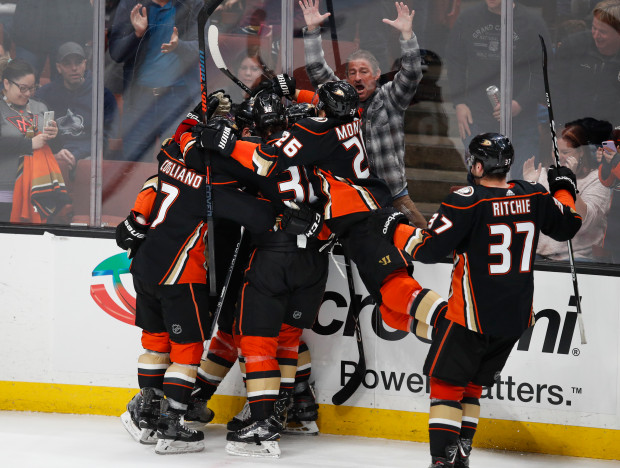 We’re almost there everyone! Once Sunday comes to an end, 16 teams remain and we will finally be watching games that will truly decide who will win the Stanley Cup. But in some ways, we’ll be seeing playoff games as early as tonight. First, St. Louis is traveling to Colorado to decide the final seed in a Western Conference that has had its bottom tier go all over the place all season long. In the East, Philadelphia should be fine if they get the job done against the New York Rangers. If not, they’ll have to hope Florida does not win their remaining two games. That is because a tie-breaking 83rd game will have to decide the final place in the Eastern Conference, where they will have the pleasure of facing a Tampa Bay team that is just beginning to sort themselves out.

Either way, questions are becoming answers in an NHL season that didn’t seem like it was coming to an end for some. Some will look forward to it being over with a brighter future ahead if their front offices ever get smart. Others will be putting on their jerseys, installing their car flags and gathering towards the bars, living rooms or the arena itself in hopes that their city can make an arduous trek last two months. There will be more stories to tell along the way. But in the meantime, let’s enjoy these final days as we take a look at the last edition of this season’s Nerdy 30+1.

Before I start writing about the Colorado Avalanche, I just want to apologize the St. Louis Blues for unintentionally putting a curse on them. Before last nights demolition of Chicago, they lost all four of their games that include a 6-0 loss to Arizona, a 4-2 loss to a Washington team that already sealed their postseason implications and a 4-3 loss to a Blackhawks team that is already out of the playoffs.

If it makes them feel better, it’s not like Colorado is doing that much better. Seriously, the eighth and final spot of the Western Conference is going to be won by someone who is straight up wheezing their way towards the finish line after looking like there was a Stanley Cup Champion could be found a month ago!

When going for a deep dive on their results, Philadelphia may be the most topsy-turvy team in the NHL this season, but it’s not like Colorado are that far behind.

All data from naturalstattrick.com

As you can see, Colorado’s entire 2017-18 season has been dictated by two things: how well their penalty kill performs and how white hot is their shooting and goaltending. Surely enough, the Avalanche are in such a cold spell to finish off the regular season that their on-ice shooting percentage at even strength is only 4.1%. Along with that, Colorado’s goaltending will now hinge on backup Jonathan Bernier after Semyon Varlamov suffered a season-ending knee injury. While Bernier is not a slouch, he certainly isn’t going to give you more than league-average performances when he is hitting his norms. Things haven’t helped that the Avalanche had to play Anaheim, Los Angeles, and San Jose since the injury, but Bernier’s 90.5% save percentage during those three games could have been much better.

Along with that, Erik Johnson is also done for the season with his own knee injury. The former second overall pick may never be the player analytics fans love, but he logs in major minutes and his loss creates a major hole throughout the rest of the defense corps. In fact, Colorado’s defense has been so banged up that there has not been a single pairing that has played over 450 minutes of even strength ice time together and only Nikita Zadorov has played over 67 games this season. Also, take a guess in that chart when Mark Barberio, Colorado’s best puck possession defenseman, went down with his lower body injury. Now he’s expected to play in the most important game of the season after being on the shelf for 33 games.

I feel for Avalanche fans because the signs of progress are clearly there. But no matter what direction tonight plays out, there does need to be an understanding that the rebuild hasn’t been completed just yet.

Defending Randy Carlyle is like Johnny Cochrane and the Chewbacca defense. Plain and simple, it does not make sense.

The Ducks are an aging and visually miserable team to watch unless you enjoy seeing John Gibson and Ryan Miller get peppered with point-blank shots like nobody’s business. In fact, the Ducks are still in the bottom third of the league in total goals scored, even after their amazing 16-5-2 run since February 15th. If it hasn’t been their fourth best “defense” via total goals against, the Ducks definitely would not be where they are now.

In fairness, Anaheim’s defense has improved during this latest hot streak. The big downside is that Cam Fowler injured his shoulder on their Easter Sunday clash with Colorado and he could miss the rest of the season depending on how the postseason plays out. It was also a major downside for Brandon Montour, who started the season being paired with Francois Beauchemin for no reason whatsoever. When playing with the aging defenseman (to put it kindly), Montour was only able to have 48.5% of his on-ice shot attempts go in his favor in 618 minutes of even strength ice time. While away from him, Montour saw 53.5% of his on-ice shot attempts go in his favor. Who know Beauchemin was that terrible? Along with that, Montour was able to enjoy having success with Fowler as the two were seeing 52.4% of the shot attempts go in their favor with 426 minutes of even strength ice time.

Nowadays, Montour is back with Beauchemin as the team’s second pair and that’s just too bad for everyone involved. With the postseason around the corner, you are certainly looking at a Hampus Lindholm-Josh Manson top pair, followed by Montour-Beauchemin in the second pair. Seriously: hide your kids, hide your wife Honda Center faithful!

The potential third pair is an even bigger sight for sore eyes because there is just nothing out there. 2014 second round draft pick Marcus Pettersson has been getting game time, but at just 45.5% puck possession it has been an unmitigated disaster for him. You can see why Bob Murray would be beyond hesitant to give 2015 first round pick Jacob Larsson a shot. Lastly, you have whatever Kevin Bieksa will be after recovering from surgery to remove scar tissue in his left hand, a 24-year old Andy Welinski who may or may not be good enough for the NHL and Korbinian Holzer. But hey, at least they had Sami Vatanen for a short period of time.

Because of all this mess, I seriously don’t know if you can trust this team to go far into the playoffs at all. If you do, it is solely because you believe in John Gibson so much that you would consider him a favorite for the Conn Smythe trophy. Knowing how hockey works and how they treat the Toronto Maple Leafs and Washington Capitals, maybe that logic does make sense. Otherwise, expect them to have a rough go of things against Los Angeles.

All season long, we have been waiting for Pittsburgh to step up and show that they are the two-time Stanley Cup Champions. Instead, we have been given a hockey team that was experiencing a massive blip where they were looking at a historically bad PDO. Surely enough, things did turn around for this franchise.

From January 5th to February 23rd, the Penguins went 16-3-1, outscored the opposition a whopping 85-47, and are only bettered by Boston with their 54.2% puck possession. While their 102.7 PDO was proof that the, welp, progression to the mean was possible, that was mainly due to their 10.2% shooting: another unsustainable piece of data. So in came Derek Brassard to provide one additional spark to Pittsburgh’s offense just in case the faucet got plugged up on that end of the ice and it has not waivered one bit all season long. In fact, their 61.5 shot attempts per hour are seventh best in the NHL. Along with that, their defense has gotten better as the season has continued.

In fact, since said hot streak, the Penguins are the fourth best defense in the NHL at 53.8 shot attempts against per hour at even strength. Here’s the giant elephant in the room that has plagued them all season…their goaltending continues to be miserable! Since February 26th, Pittsburgh has only outscored opponents 66-64 in 19 games and their goaltending has dropped to a 91.0% save percentage at even strength. As a result, a team that you thought has cured its ailments has gone 11-6-2 in their last 19 games. All of this is considering that their underlying numbers continue to be great. They may not be so great that they are guaranteed favorites to win the Stanley Cup, but they certainly are much better than the 2016-17 iterations of themselves.

And that’s the thing with this Penguins team. They genuinely should be Cup contenders again because the league hasn’t changed so much that they should be scared of any great future dynasty. The Metropolitan Division has been a mess on the whole and it’s not like every Atlantic Division contender has been pristine all the way through. So at a minimum, another Conference Finals appearance should be in the cards for them. If Murray can get going between the pipes , they should be fine.

If there has been one team that has been dominating on the hockey rink and on the stat sheet all season long, it has been the Boston Bruins. Sure, Tampa and Nashville have really shown what they are capable of when they have their full complement of players or don’t make the dumbest roster decisions. But under Bruce Cassidy, the Bruins have continued to improve as a great puck possession team with underrated deep lines at forward and defense. Add in the depth that has been provided by Charlie McAvoy, Matt Grzelcyk, Jake DeBrusk and Danton Heinen and you have a team that surely is capable of winning the Stanley Cup. Oh, and did I mention they have Rick Nash now?

Since he has joined the Bruins, the 33-year old may only have three goals and six points in 11 games, but he has generated a whopping 57.0% puck possession while being on the second line with Riley Nash and David Krejci. Add in the David Pastrnak-Patrice Bergeron-Brad Marchand top line and you’ll be hard-pressed to find a better top six in the NHL from an analytical perspective.

That being said, the Bruins have been dealing with many injuries since the trade deadline. McAvoy and Zdeno Chara have been missing some game time and now it is Nash’s turn to be on the disabled list due to an upper-body injury. Add the injuries to Riley Nash, Sean Kuraly, and Tommy Wingels and it is understandable if this team is starting to take their foot off the gas a bit despite chasing the top seed in the Atlantic Division. But hey, it’s not like Toronto’s that good of a hockey team, right?

Brandon Carlo may be done for the season, but it is not like Boston does not have little options. Head coach Bruce Cassidy can come in and put a McAvoy-Chara top pair, insert Nick Holden in with Tory Krug on the second pair and finish it off with a Kevan Miller-Grzelcyk third pairing. Or he can be dumb and insert Adam McQuaid into the lineup. Basically, Cassidy may not have the top tier firepower that a Tampa Bay, Pittsburgh, Nashville or even Washington can bring, but there are much smaller weaknesses among any of those six in comparison to any other team’s blue line this postseason. It’s these lack of question marks that explain why Boston is so good in 2018.