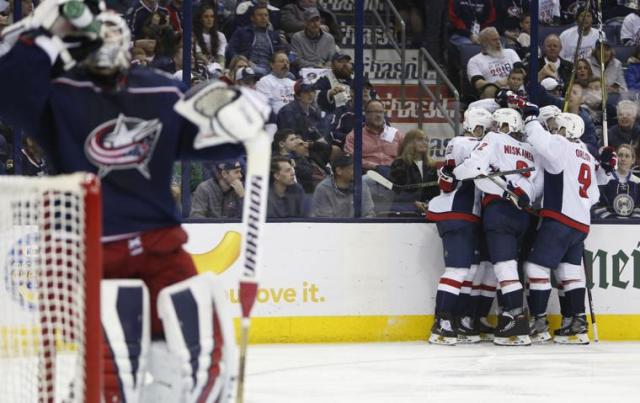 There was just too much data (or number playing depending on how you see it) to prove that the Capitals always make it hard on themselves. They started this series down 0-2 despite having home ice advantage. They could have been the first NHL team ever to lose the each of their first three games in a playoff series in overtime. Speaking of overtime, They had one of the worst defenses in the league and didn’t have the cap space to make a big enough upgrade to completely fix it. Barry Trotz continued to show failure in learning any lessons in his line combinations by time and again not giving his young players a shot. He also continued to play a conservative approach when the likes of Pittsburgh, Boston, Tampa and Toronto were playing a much faster game that is of the modern ilk. Braden Holtby’s extremes were so bad in February that Phillip Grubauer had no choice but to be the starting goaltender in the postseason after saving the Capitals in March.

And yet, here we are, nine days later after staring at continued misery in the face to see this team rattle four straight wins and face another date with the Pittsburgh Penguins. Whether they are worthy of finally putting down a franchise that is just destined for another Stanley Cup run is a story for another time. For now, let’s embrace that Washington was able to win a series against a better team from an analytical standpoint.

For starts, Braden Holtby is back to his playoff best while Sergey Bobrovsky continued to disappoint in the postseason. After Washington seemed to regain footing of the series, Columbus came at them in waves from the third period of Game 5 onward. It was such a chaotic barrage that you wondered if the Capitals knew how to defend anymore. But instead of wilting under the pressure like he did the second half of the season, Holtby put a bow to a series that saw him save 93.2% of his shots and had every one of his starts hit quality status. Other netminders have performed better this postseason, but in terms of importance to a team that was in crisis, you’ll be hard pressed to find one that saved their bacon so much in the big picture scheme of things as Holtby has. Tuukka Rask and Martin Jones are not far behind, but its amazing how no other goaltender is better at stopping the puck in the past six years and with over 20 games of postseason experience than him. Long may it continue because Pittsburgh are no longer pushovers this time around.

On the other side, what else is there to say about the two-time Vezina Trophy winner? He had his moments the first two playoff series, but there always was inevitability that he wasn’t going to be able to take control of the game. As a result, Washington gained confidence that they could puncture his balloon whenever they needed to. Surely enough, they did so that Bobrovsky’s first two games were the only ones that hit quality status. Since then, he was only able to stop 88.7% of his shots faced. Now he owns an 89.1% save percentage and a 25% quality start percentage in 24 career playoff games. Jose Theodore will forever be the gold standard of Vezina Trophy winners gone bad, but this is getting to be something else.

Also, it was getting more clear as the series went along how much the Blue Jackets missed a healthy Alexander Wennberg. Along with Artemi Panarin, Pierre Luc Dubois and Cam Atkinson, you would be hard pressed to find a better forward on this team that can consistently generate offense like he can. Wennberg is a very subtle hockey player, but like Justin Williams, you leave the rink amazed how much of an impact he has on the game. Name any forward linemate he was with and he simply made them better.

But once he went down injured from the hit delivered by Tom Wilson in Game 1, head coach John Tortorella was scrambling for answers in his second line. He tried Boone Jenner and while it was not a complete disaster as his regular season indicated (46.5% puck possession!), it still wasn’t good enough against a Capitals team meaning business (49.3% puck possession in the postseason). Matt Calvert, on the other hand, was more a blessing than he was a definitive solution. The 28-year old was only player that bettered Wennberg in puck possession among Jackets players at 60.5%, and he was rewarded with three goals and four points, including the Game 2 overtime winner. However, this all came after having a miserable 47.6% puck possession in the regular season. When you couldn’t find anyone to play over 50% of your even strength time on ice with and the forward linemate that shared the most time on ice with you was Brandon Dubinsky, you could see why this was a flaw.

Simply put, it is amazing how much Dubinsky has fallen (16 points in 62 games with 47.4% puck possession. 0 points and 39.3% puck possession this postseason) and you genuinely have to wonder if he is playing himself out of the league. Then again, he still has another three years left of a contract that gives him $5.8 million per season. And I thought the T.J. Oshie deal was bad!!! Because of that, it was simply amazing how much Washington was able to show their strength in depth this postseason when it really should have been the other way around.

Now the Blue Jackets are going to spend $13-18 million depending on what Gary Bettman sets for the salary cap, but how much of that goes to the contract extensions of Ryan Murray, Oliver Bjorkstrand and Jenner? Once that’s taken into account, will they be able to improve the roster on the whole so that they can either bring back or replace Calvert, Thomas Vanek, Mark Letestu, Jack Johnson’s remains and Ian Cole? That’s five roster spots that may or may not be able to be filled with great efficiency. Also, Panarin’s $6 million per year contract runs out in 2019. Will Columbus be able to afford him in the long run? I love everything about this Jackets side and what they have been building on over the years, but this may be the first time in a while where you start to wonder if this team has a shelf life.