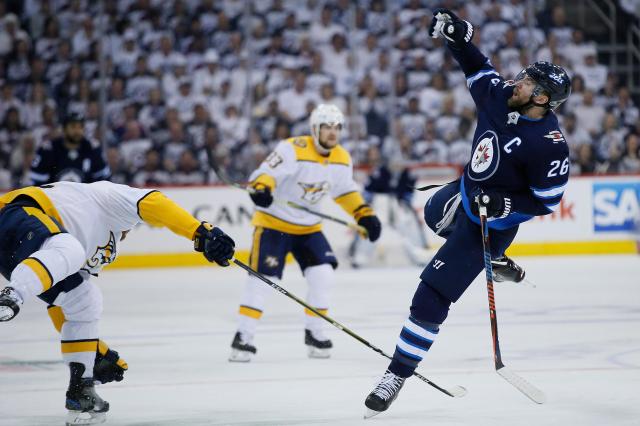 We are just one day away from Washington DC possibly being the most optimistic it has ever felt in a generation. No matter what comes of their series against Tampa Bay, the Capitals have flat out overachieved their way towards something I have never thought would be possible anymore. But before that all goes down, one more second round series has to be completed.

Just like Toronto and Boston gave us story lines up the wazoo in Round 1, Nashville and Winnipeg have been bringing fireworks on the ice almost every single time they play against each other in Round 2. Along with that, the two fan bases have been easily the most vocal and visually appealing of them all. Almost all of that has to do with the lack of baggage these two franchises have. Nashville is a season after their first ever Stanley Cup Final appearance and Winnipeg has won its first ever playoff series after only had its franchise back six years ago. Everything is new to them, and therefore risk taking has been taken to such extremes that we have never seen before.

In total, there have been 40 goals between the two teams in six game and the even strength pace of 124.3 shot attempts per hour is a perfect indicator for how firewagon this series has been. Especially in games 2 and 3, you genuinely had no idea if these two teams knew if playing defense was a requirement to win hockey games. Either way, those two games have by far been among the most fun in the entire postseason. Both goaltenders have had to deal with plenty of adversity if you were to exclude Connor Hellebuyck’s 46 saves from Game 1.

Through all the action, you could only find microscopic differences between the two teams overall. Both of them have 250 score-adjusted unblocked shot attempts at even strength, as well as 174 score-adjusted shots on goal, and roughly 64 score-adjusted high definition scoring chances. Along with that, both teams have four power play goals each in less than 20 opportunities (15 for Nashville, 18 for Winnipeg). On the whole, without any adjustments, both teams have exactly 338 shot attempts at even strength. And while the Predators have had a definitive edge in scoring chances (163.7-153.3), Winnipeg has been able to get five even strength goals from their defensemen. So yeah, this series has basically been on the knife edge that we all have been wanting.

However, the way both offenses have attacked have been totally different between the two teams. While Nashville has only had PK Subban and the top line of Filip Forsberg, Viktor Arvidsson and Ryan Johansen be the only players to rack up more than three points, Winnipeg’s attack has come from across the board with nine players hitting the same milestone. However, Nashville’s top line has actually been owned in the track meet style of play this postseason. For example, while Filip Forsberg has been able to average a whopping 68.7 on-ice shot attempts per hour in over 40 even strength minutes against Mark Scheifele, Scheifele has returned the favor with a gargantuan 75.2 on-ice shot attempts per hour going the other way.

It’s been quite a fascinating philosophy change for the Jets this postseason, especially so that they can incorporate Paul Stastny into the lineup. Rather than have him as among the shut down forwards as you have seen him previously in Colorado and St. Louis, Stastny has been playing in an offense first line with Nikolaj Ehlers and Patrick Laine since coming to the Jets and it has really brought the best of his offensive prowess. Along with that, Stastny’s addition has dropped Matthieu Perrault and Bryan Little down to the third line with two-way forward Joel Armia to form a solid third line. As a result, no longer are you seeing the well rounded hockey team that you have been seeing throughout the season. Instead, you are seeing a hockey team that possesses at least three lines that can score at will when they are at their best.

Nashville posed roughly the same type of depth when they made it to their Stanley Cup final run last year. However, this season has been more of an emphasis of domination off of the second line of Kevin Fiala, Craig Smith and Kyle Turris. However, head coach Peter Laviolette has been making a few head scratching decisions in this series. Instead of playing Fiala and trade deadline acquisition Ryan Hartman, Scott Hartnell has been welcomed into the lineup after only scoring 24 points in 63 games. While that point total, plus his 51.0% puck possession aren’t too bad for an aging former star on the wing, Hartnell has been an unmitigated disaster this series. In his two games, he has had no points, just three individual shot attempts and a team-worst 32.4% puck possession.

Along with that, the third line of Nick Bonino, Colton Sissons and Austin Watson is just not working at all as a shut down line. Simply put, this has to be the fourth line the rest of the way if they are to win Game 7, while I would play the two best lines out there. You’ve made it this far over the past two seasons, Laviolette. Just keep the lineup simple and go power-for-power among the top six. However, I would swap the roles between the Bonino line and the Mike Fisher led fourth line: especially now that Calle Jarnkrok is back in the lineup.

If they can also get anything out of their defense, especially Roman Josi and Ryan Ellis, the Nashville Predators and their advantage of using last change should come through. However, Winnipeg have just been impressive this entire postseason. Even if they lose tonight, this is a warning to the rest of the NHL that they will be back stronger than ever.