Should we expect more parity in sports?

“All you need to do is get in the playoffs and anything can happen.”

Sound familiar? It seems like that has been the quote everyone says every time the playoffs start for your favorite professional sport. I certainly learned that in one of the most scarring playoff series in certainly my lifetime and probably in Washington sports history. The 2009-2010 Washington Capitals weren’t just a sports team, they really were a world class performance act. They were the hottest ticket this city has seen since the early 1990s Redskins. They also taught many new hockey fans how fun the sport can be by scorching the NHL and anything in it’s wake with its electric, fast-paced, goal scoring-first style. Sure, they were eliminated by the arch-rival Pittsburgh Penguins in the second round of the playoffs the season before. However, a break here and there and all they needed to do was beat a lucky Carolina and maybe a past-its-prime Detroit and the Stanley Cup is theirs. This time, they won the first president’s trophy in franchise history and with the third highest point total in NHL history. So the playoffs should have been easy this time around, right? Right?! Well, that never happened and the franchise has been traumatized ever since. I mean, I spent 2 years (and most importantly, 164 regular season games) of my life ready to see this team win the Stanley Cup. That certainly wasn’t the case and it was a sporting life lesson I will never forget.

In the last decade, we have had the 2006 Steelers and 2011 Giants have the lowest seeds in the playoffs and win the Super Bowl. We had the 2006 George Mason Patriots and the 2011 VCU Rams make the NCAA Men’s Final Four. We had the 2010 Dallas Mavericks come from no where and win the 2010 NBA Finals. Finally, we had the 2006, 2011 and 2012 St. Louis Cardinals take a nap in the regular season, turn 3rd rate players into superstars, never show any signs of being a World Series contender and then pull off upsets left right and center. What does a sports fan do? We sit on our chairs and watch 100s of 1000s of regular season games, attempt to make conclusions about who’s good and who’s not and then all of a sudden, we realize that none of it matters. You can’t help but feel cheated. Sure, it’s great to see a team come from nowhere, face adversity and win a championship, but now it FEELS like it is happening more often than not. The real question is, “is this true?”

So here’s how we try to solve this. First, we look at a sports league’s playoff bracket for every season in the last 25 years and we RESEED all playoff teams. “Wait, what do you mean reseeding?” says you, the reader. That means, we will reorder all the playoff teams based on their winning percentage or points total, without any concern about whether they won their division. For example, let’s take a look at last year’s Stanley Cup playoffs. Really, will Florida and Phoenix be remembered as the 3 seeds in their conferences for the rest of eternity? Not on my watch; they’ll be considered 6 seeds instead. Next, we add all the seeds together throughout the playoffs and we get our parity score. For the 2012 Stanley Cup playoffs, we get a 25-year high of 149 points. That’s what happens when the worst seed in the playoffs remembers what its like to score goals after not knowing how to do it for 82 games. Finally, we divide the minimum parity score (the score of a playoff in what happens if we have the higher seeds always win during the playoffs) with that season’s parity score. This is what will be called the parity rate. Again, for the 2012 Stanley Cup Playoffs, we get a minimum score of 101, so 101/149 is a parity rate of .678. The lower the number or farthest away from the number 1, the more parity or farthest away from normalcy happened.

Now, let’s look at the data from the big 4 American sports in the last 25 years. 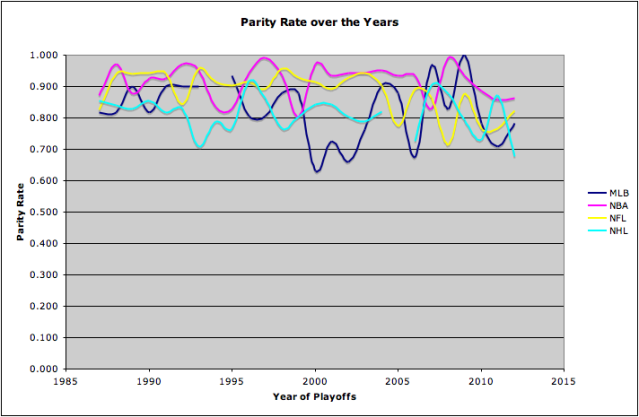 Woo, squiggles!!! Seriously though, let’s break it down. First, all the breaks in the Major League Baseball and NHL curves indicate one thing: lockouts!!! Aren’t they just fun? Next, it is proven that the NBA has the least amount of parity among the big 4 sports while the NFL has seen a gradual increase parity over the years. Finally, Major League Baseball and the NHL are duking it out as the league with the most parity(with baseball reaching maximum parity in 2000!!!). Why is this the case? It’s because both leagues use their playoff formats to reward winning your division no matter how terrible the division is. The NFL does the same thing, but considering the injury rate and the fact that NFL roster sizes double all the other professional sports definitely makes sure that the division champions find a way to have the best record. Now, here are the latest trends.

Major League Baseball has seen its playoffs hit above average parity the last three years and eight of the past thirteen years.

The NBA and its lack of parity has actually seen its playoffs hit above average parity the last three years and four of the last six years. Thank you 2007 Warriors and Jazz, 2010 Celtics, 2011 Mavericks and 2012 Sixers!!!

The NFL has also seen its playoffs hit above average parity four of the last five years and five of the last eight years.

Finally, the NHL and its nuttiness has seen its playoffs hit above average parity three of the last four years and ten of the seventeen years since Gary Bettman eliminated the Norris, Patrick, Adams and Campbell divisions.

And now, the moment you have all been waiting for, the biggest reason why this article is being posted. Cue it Luther!!! 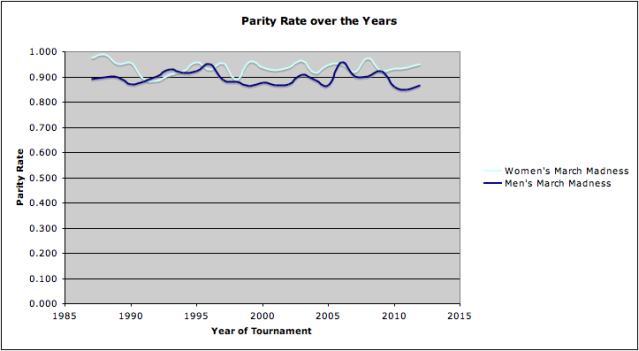 That’s right folks. March Madness is here and this data debunks all myths as to what you think it should be. Sure, March Madness will generate a lot of great memories, but at the end of the day, your 2011 VCUs, 2010-2011 Butler’s and 2006 George Mason’s need to happen more frequently in order to be considered a tournament with the most parity. Lots of upsets do happen in March Madness, but when you have a 64 team tournament versus a 16 team event, odds are that will happen. The top 4-5 seeds usually find a way to contend for the NCAA title. With that said, four of the last six women’s tournaments and the last three men’s tournaments have witnessed more parity than average.

So yes folks, we are seeing more parity throughout the years. What would be fascinating is if the average parity rates drop significantly and they become the new norms. That’s why we have to keep watching sports.

Many thanks to wikipedia.org and sports-reference.com for giving me the tools to perform this research.

← What is the success rate of a typical NHL entry draft?
What is the definition of a top six forward? →