Week 8 of the Nerdy 30: Swatted Jackets and Thunderstruck 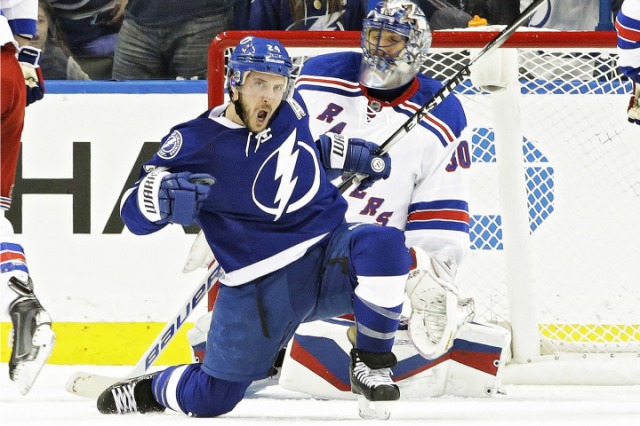 Everyone is stuffed, literally and figuratively, from the Thanksgiving holidays and we still haven’t seen a head coach get fired. As a result, you have to be reminded about the sweepstakes that are coming in this year’s entry draft with Connor McDavid, Jack Eichel and Noah Hanifan, especially considering that the draft lottery odds have gotten better for teams that are closer to a playoff spot. Honestly, if you are a team that demands playoff appearances coming into this year like a Philadelphia, Colorado, Dallas or Arizona, rather than fire the coach, wouldn’t it just make sense to have the team be terrible on purpose and use the summer to, at least, make a proper reload and free up some cap space for a genuine Stanley Cup run for the long term?

In the meantime, it is time to say good bye to Columbus after injuries have really caught up on this team and have been consistently placing them at a 60-70 standings points pace. They are first up in the latest of the Nerdy 30.

Since injuries are the name of the game in Columbus, let’s take a guess as to how many skaters have tried out in a Blue Jackets uniform this year. Try 30! That’s right, 12 recent acquisitions or replacement level players have already played for Columbus and we haven’t even hit Christmahannukwanzadan! Specifically, a top line forward, two of the team’s best shutdown forwards and two of their three best defensemen are out for an extended period of time or the entire year. One thing that you hope to see right now is how any of the 2013 1st round draft picks would perform in Kerby Rychel, Alexander Wennberg and Marko Dano. Both Dano and Wennberg have been sent back to the minors while Rychel has played the first of his two career NHL games. While Wennberg and Dano were given really challenging zone starts, Rychel has benefited from having the easiest on the team. Wennberg could potentially be a decent shutdown forward, but his possession and box car numbers proved that he is not ready yet. Other than seeing if Ryan Johansen can carry this team to more than 70 standings points with 40 plus goals and 70-80 points, there really isn’t anything to see here until next season.

Once again, Toronto is in the driver’s seat for a playoff position and once again, outsiders are wondering when the bottom is going to fall out for this team. They are third in the NHL in even strength shooting percentage and players like Leo Komarov (lingering concussion issues aside), Cody Franson and Mike Santorelli are reaping the benefits immensely. Their puck possession in close score situations has not been all that disgusting, but it is still terrible once you include the entire picture of five on five play. The Maple Leafs simply don’t suppress shots at all and that will be their downfall this year, especially if their goaltending does not improve to the level that they were in the first half of last season. If you want any positives, Morgan Reilly is beginning to turn a new leaf (see what I did there?) and has been putting up good numbers (9 points in 22 games) despite sheltered minutes. Also, Joffrey Lupul has been terrorizing everyone in the possession game since coming back from a broken hand despite having the highest relative zone start percentage in his NHL career.

Even though it has been good to see Boston come back to being a decent playoff team this last month, you can’t help but feel there is a ceiling. Within a two year span, their offense has gone from being the best in the NHL to being league average, even if they are now an elite shot suppression team. The advance stats translate to the fact that not a single Bruin was in the top 100 in goals scored coming into last night’s game against Anaheim (which led to Brad Marchand currently leading the team with 6 goals).

Plain and simple, the Bruins are in deep trouble this season if Zdeno Chara and David Krejci do not come back to full strength and if Simon Gagne plays any second of playoff hockey. I mean, how many painful comebacks does Gagne need until he becomes the NHL’s answer to Brett Favre? It’s good to see Seth Griffith make a name for himself, but this is while he is facing difficult assignments and is mostly performing damage limitation until the better cavalry arrives. Others like Hipster Picking Alum David Pastrnak, Joe Morrow and Alexander Khoklachev have either come in and played horribly sheltered roles and really have no business playing for this team. Oh, and we haven’t mentioned that the goaltending finally looks like it has regressed to the mean in a very inconvenient time for this franchise.

If Ben Bishop can find a way to improve his save percentage, look out! At the start of the season, I called Tampa Bay to be my representative to come out of the East for the Stanley Cup Final, and boy do I look more like a genius every week. High on-ice shooting percentage aside, Ryan Callahan is on a point per game pace and so is Victor Hedman after missing all but seven games to a broken finger. Also, Nikita Kucherov might actually be one of the breakout point-getters in the NHL. More importantly, Steven Stamkos is back and will play 82 games and is in his age-24 season. Man is it glorious to watch!

That being said, I can’t help but look at that even strength shooting percentage at a whopping 9.9% and think that nightmares are going to happen again and all the bitterness from the Martin St. Louis trade are going to haunt them. Since 2008, only the 2009 and 2013 Pittsburgh Penguins have been able to make it to the Conference Finals or better while having that number hit 9% or better throughout the regular season. Remember, it is regular season goaltending more than shooting that has been the catalyst to teams performing well in the playoffs. For Bishop, his career save percentage at even strength has always been above league-average at .925 and now that he has faced 2657 even strength shots, Bishop’s chances of randomness in his career numbers are at about 13% according to Gabriel Desjardins. In short, could he be terrible this season? Yes, but not as much as seeing if he can figure it out because he is an established enough goaltender in the NHL and into his age-28 season.

← Week 7 of the Nerdy 30: Low on Oil (again) and a Lonely Island No More
I knew him before he was cool: Damon Severson →