Week 23 of the Nerdy 30: Detroit is old news again and Ranger Danger 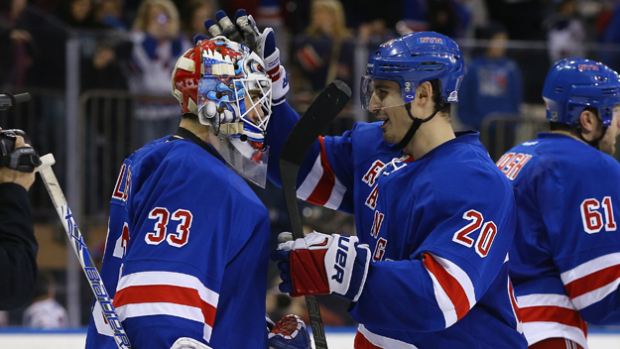 We are officially within a month from the playoffs and teams are beginning to mold their recent trade acquisitions. Time is running out for team’s to improve or worsen and for teams from the outside to make it into the playoffs. Let’s not dilly dally in our latest edition of the Nerdy 30.

One of the funniest stats I liked following during the season has been whether New Jersey can become the oldest team in NHL history. They were right on track of it, according to quanthockey.com, but then GM Lou Lamoriello traded away Jaromir Jagr and Marek Zidlicky. Since February 17th, the Devils have gone 9-3-2 and now look like they’ll finish with a respectable record for a non-playoff team. The problem with looking at this run is that their PDO is at a 102.3 and all their skill players have less than 46% of their shot attempts going for them. Most of the puck luck has to do with the amazing run goaltender Cory Schneider has been going through by saving 94.3% of all even strength shots.

In short, with the way this team is constructed, this is what we expected out of this Devils team when things click for them, even without Zidlicky and Jagr. Schneider will get red hot and players like Mike Camalleri will generate enough offense for New Jersey to win 2-1 or 1-0 all the time. If Lamoriello or any Devils fan is smart, they should see that this team is miles away from any progress within the next couple of years. Michael Ryder is a healthy scratch, the Ryan Clowe contract is nothing short of a catastrophe and the likes of Scott Gomez is being forced to resurrect himself for anything to happen offensively.

Lamoriello can go two routes with this. He can fill out the potential $15-20 in cap space with more veterans, but ones that will be guaranteed to deliver next season and beyond; especially with the crop of free agent defenseman available. Or, Lamoriello finds some way to trade away anyone not named Schneider with a deal that lasts longer than two years. The latter sounds smart and logical, but Camallieri, Adam Henrique, Travis Zajac and Andy Greene each make over $4 million per year and have their contracts run out as early as 2019. Odds are, the only teams interested in trading for these players will be teams that want to only meet the salary floor. Sadly, the most obvious team to meet that characteristic is New Jersey.

Speaking of teams and age, the Vancouver Canucks might hit that point of no return sometime soon. While GM Jim Benning has done a good job at finding short term solutions for the Canucks, this team just can’t age well. Their four most important players are all over 33 years old (the Sedin twins, Ryan Miller and Kevin Bieksa) and only Bo Horvat, Linden Vey and Zach Kassian are under-25 and have played the vast majority of the season. There was a reason why Vancouver traded for Sven Baertschi.

Since February 11th, Vancouver has gone 11-5-1, but their score-adjusted shot attempt percentage at even strength is in the bottom ten at 48.2% and their on-ice shooting percentage is the third highest below Minnesota and Colorado. During that time, the Canucks have used ten defenseman with Bieksa and Chris Tanev missing significant time due to injuries. On February 22nd, Ryan Miller has been out to a lower body injury and could miss the rest of the regular season. Los Angeles is beginning to tear it up again and have a shot at facing Vancouver in round one of the playoffs. That’s not great for a franchise that has been going through 44 seasons of hurt and misery and don’t want to see an era come to an end.

Don’t look now, but since the additions of Erik Cole and Marek Zidlicky, Detroit might have gotten old again and they are not getting better as a result. Since March 4th, the Red Wings have gone 3-4-0 and despite having 52.3% of score-adjusted puck possession at even strength, their on-ice shooting percentage was at a lowly 6.0%. Add the fact that this team hasn’t generated shots all year and you have a team that, despite some good balanced attack this season, has the potential to see it’s goal scoring dry up fast. With Pavel Datsyuk out for a bit with a lower body injury, that is not going to become an easier solution to fix anytime soon.

So far, the Red Wings and Tampa Bay Lightning have been destined to play each other in round one for about a month and with the way both teams play defense at even strength, I have been wanting to call it the “watching paint dry” series. Tampa generates more offense than Detroit does while there is little separating Jimmy Howard and Ben Bishop barring injuries (which for both goaltenders, isn’t something you can completely depend on).

Now only paying attention to a seven game sample is always a very dangerous game, but now that teams across the NHL are playing the last 15 games, staying hot is very important and is seen to have a correlation to how well they do in the playoffs. For a team that has been so good at puck possession all season, it is important for Detroit to right the ship immediately.

Hey, did you know that while the Rangers have gone 13-1-2 since February 10th, there’s this backup goaltender named Cam Talbot who has performed brilliantly while usual starter and future hall of fame goaltender Henrik Lundqvist has been out since taking a slap shot directly at the throat? No, you didn’t because not a single media member has thought of that narrative. That was only made up by me. Ok, see you next week with another Nerdy 30 post!

In all seriousness, the Rangers have been brilliant for the last month plus, but now that Montreal and Nashville have struggled of late, they have taken over as the luckiest team in the NHL based on PDO (combined on-ice shooting and save percentages at even strength). That being said, that combined percentage at even strength is not as astronomically high as other teams have hit in years past (hello, 2010 Washington Capitals) and their on-ice shooting percentage is still below 9% (8.66% to be exact); the rate in which teams find a way to underachieve in the playoffs if they hit that mark in the regular season.

One crazy stat that no one has definitely talked about (at least, I hope no one has talked about) is that Derick Brassard has had 12 even strength assists in that 17-game stretch. With him in the second line with Chris Kreider and Martin St. Louis pre-leg injury and Derek Stepan being promoted to the top line, the Rangers can now depend on two scoring lines that each face the toughest competition on the team. With Carl Hagelin being forced to play on the third line with an ever-improving Kevin Hayes, this hockey team will come into mid-April with three lines that can score goals and will be able to stretch defenses out. Now if they can win the President’s trophy and maintain their league high PDO…

← Week 22 of the Nerdy 30: Melted Avalanche and Parliamentary Power
An Ode to the Quarry House Tavern →