Week 24 of the Nerdy 30: Shark Bitten and Cat Scratched 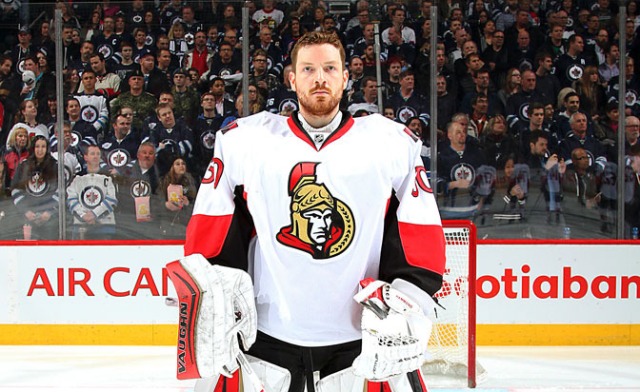 Somehow, a goaltender that is making people throw hamburgers is in my nightmares right now. Sports shouldn’t be this miserable, but it is sometimes. Now, I hope that my Capitals don’t fall pray to this dude that is seriously way too lucky to keep this up and to a Boston team that is being snake-bitten offensively, even if their numbers on that end of the rink have fallen off a cliff.

While we keep looking at Ottawa, they clearly are not a team that should be scratched off the rankings anymore. If you think this is a mistake by me, take note that last year, Dallas would have gone through the same route if I made these Nerdy 30 posts last year. It happens. An 82-game season has tons of ebbs and flows that before you know it, somebody catches fire and destroys worlds to get into a playoff spot.

While the Senators are back in, we need to eliminate two other teams: one for the fact that we are at the six-seventh point mark of the season, the other to replace Ottawa. Those two teams have mascots that should be intimidating, even if they don’t know how to skate. San Jose and Florida are out in this week’s edition of the Nerdy 30.

Throughout the course of the season, I explained that despite Florida being a decent puck possession team, they just could not score goals to save their lives. That is why, despite having a young nucleus developing in Aaron Ekblad, Jonathan Huberdeau and Nick Bjugstad, General Manager Dale Tallon decided to bring in 42-year old Jaromir Jagr into the fold at this month’s trade deadline. The experiment hasn’t fully worked. In fact, Florida continues to see their offense dwindle towards bottom ten levels. Now this team can defend and produce shots from the point, but until the likes of Huberdeau and Bjugstad and even Aleksander Barkov can consistently hit top-50 goal scoring levels every year, their offense will never be good enough to make the playoffs, let alone threaten anyone in them.

That all being said, the Panthers can at least give themselves a small celebration for now having two parts of their team (defense and goaltending) hit elite levels in the NHL. But if they don’t work on their scoring talent up front, this team will time and again, alienate their fans; something they keep doing for the endangerment of the NHL throughout their entire history.

I think we can all agree that San Jose has hit “left shark” mode. Thank you Katy Perry for unintentionally finding a way to troll this hockey team out of the playoffs. We hockey fans love you for it. These were the potential implications that Doug Wilsom knew about when he decided to keep Joe Thornton and Patrick Marleau while trading away Dan Boyle and trying to reload instead of rebuild. The team was supposed to take advantage of a weak Pacific Division, but instead, San Jose looks like they don’t have the talent now to compete for a playoff spot in the long term. Since George McPhee got fired, I feel this way about General Managers that looked like they could get fired: they won’t get canned because of one bad move, but they will get canned for a series of bad moves. The “reloading” of the Sharks was one thing, but not taking full advantage of their 2009 and 2010 draft classes when these players are hitting the primes of their careers while not making a big splash move to replenish the talent of this team is another. Either way, Doug Wilson and head coach Todd McClellan probably will be fired and they should expect it. McClellan should be on another NHL bench, while Wilson may no longer be a GM somewhere else if teams believe in the mathematical trends. That’s just the nature of the business.

My latest hockey writers post revolved around whether or not the Washington Capitals can make the playoffs, but it also explained whether or not Ottawa and Boston can make it too. Even if the Andrew Hammond experience is flukey like nobody’s business (0.898 SAVE PERCENTAGE IN THE AHL THIS SEASON!!!!), head coach Dave Cameron has implemented systems that have made the Senators a much more threatening team offensively. On the defensive side of things, longtime Senator Chris Phillips was sentenced to 12 years dungeon for being past his prime and no longer being good at hockey. Taking his place is experienced youngster Patrick Wiercioch, who is a much more mobile defenseman and is a cheaper contract for Ottawa to handle in the long term. Somewhere in the luxury suites, Eugene Melynik is swimming in the millions of cap relief, Scrooge McDuck style.

In all seriousness, let’s not think about how good Andrew Hammond is. Let’s think about the fact that Ottawa may trot out six twenty-goal scorers and another one in years past in Clarke MacArthur, who is coming back from concussion-like symptoms. Now all those numbers may be bloated because of the over 9% shooting at even strength (a zone that teams want to avoid relying upon), but the shot generation the Senators have put up should be a more sustainable category. If they can maintain their structure in the next two weeks, not only will Ottawa make the playoffs, they should be able to take the Canadiens or Rangers to a seven game series in round one, at minimum.

Now that we are hitting the tail end of the regular season, I think I can go ahead and state that these seven teams present some qualities to win the Stanley Cup this season. The Rangers could join this group if they can prove that a beat keeps going when Henrik Lundqvist starts in net again instead of Cam Talbot and their shooting percentages don’t plummet miserably (or, they just don’t win the President’s Trophy). I also like Minnesota if Devan Dubnyk can keep playing well and they get the right opponents to make it to the finals (hello round one match-up with the always flukey Anaheim Ducks!!!). Otherwise, it will be very difficult to see anybody join this group. All season, I have predicted a Tampa-Chicago Stanley Cup final and it’s amazing to see that this is where we are on pace with five months later. Next week, I’ll begin writing some more about these teams and looking to see how their chances are for winning it all in June.