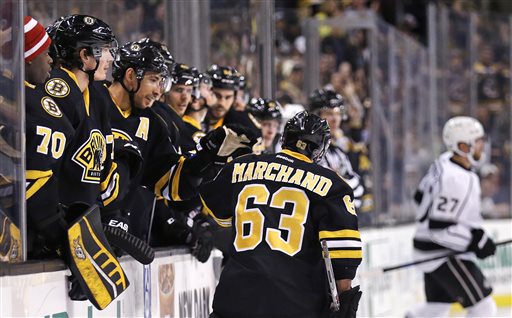 Boston vs Ottawa and Los Angeles vs Calgary. That’s all that it has come down to for the rest of the 2015 NHL regular season. If you want to add some March Madness comparisons as it is coming to an end, you can argue that these are the equivalent of play-in games to the Stanley Cup Playoffs. Boston and Ottawa have finished playing against each other with the Senators winning three of the five contests while Los Angeles and Calgary will go at it one more time on April 9th. While the better team in the standings refuse to go away, the lower ranked team are going through some untimely losing streaks. Which one will come out on top and which one will think of all the “what if’s” throughout the off-season? Here is all the breakdown of these four teams in the latest edition of the Nerdy 30.

Things aren’t even getting better when the team is on the power play. Despite continuing to draw a high number of penalties this week (24 in five games), only generating 84.2 shot attempts per 60 (5th worst in the NHL) is not going to cut it. Yes, Florida and the New York Rangers are elite penalty killing teams, but San Jose, Detroit and Toronto aren’t. The on-ice shooting percentages are still good, so Ottawa has to get back on track to putting in the effort that they did to make Andrew Hammond the Hamburglar, otherwise their playoff hopes may be dashed before next week’s Nerdy 30 comes out.

Hartley Magic hasn’t been as strong as it has been in recent weeks, but they continue to win. Despite winning three of their last five, their league best penalty differential wasn’t so great; losing in that statistic 11-15 this week. Their penalty kill also hasn’t been so great as they have given up the second most shot attempts per 60 minutes in the NHL this week at 116.8 compared to their 10th best 91.8 all season and it hasn’t helped that their goaltending has been consistently sub-par when shorthanded all season (85.9%, 25th in the NHL). They have also been fortunate that their post-all star break shooting percentage (15.3%, 5th in the NHL) on the power play has compensated the gradual drop-off in their shot generation. Now they have to face St. Louis and Winnipeg with Arizona, Edmonton and their rumble with Los Angeles in the middle. It’s not an easy task considering how easy Los Angeles’ remaining schedule looks. Only Hartley Magic can pull this off.

Now you may think that with Ottawa’s struggles, Boston is in the clear, right? Wrong! Yes, the Bruins faced four underrated possession teams in Florida, Carolina, Anaheim and the New York Rangers, but they only had 48.4% of the score-adjusted shot attempts go their way. Their PDO was a whopping 102.2 and Tuuka Rask saving 96.3% of the even strength shots on goal. That won’t last; especially when the team’s offense hasn’t been good for the majority of March. To top it all off, Dougie Hamilton could miss the rest of the regular season after injuring his shoulder against Florida last week.

It can’t be stated enough that no matter what happens to them, Boston needs to rebuild and shed cap space fast. One way to do that is to sit and watch the David Pastrnak experience. Let’s just say this guy was a Hipster Pickings Alumni for a reason. He absolutely torched the Swedish second division last season and the AHL this season to deserve his NHL call up. Now, there is nothing more hilarious in the NHL on a daily basis than Andy Brinkley trying to enunciate his last name while he torches NHL defenses.

That all being said, the writing has been seeping all over the walls of the TD Garden since Zdeno Chara’s knee injury last November. His contract, along with David Krejci’s, Milan Lucic’s and Loui Eriksson’s have become such an eyesore that at least one person has to be traded and a cheap replacement with guaranteed future production has to be in it’s place for Boston to stay consistently good. Thanks to everything wrong about the Collective Bargaining Agreement and the league’s owners that control them, that will be better said than done.

Just when we thought the defending Stanley Cup Champions are back in the playoffs after beating the entire New York Metropolitan area in three games, they get shellacked in two 4-1 games against Minnesota and Chicago. Yes, those last two teams are really good, but considering the hole the Kings have put themselves in for the fourth straight year, they can’t afford to lose these games anymore.

Even though their defense has given up a little more shot attempts within the last couple of weeks, they are still generating shots at a reasonable level. What may be concerning though, is that since the New Year, the Kings have gradually seen their on-ice shooting percentage plummet to one of the worst in the league.

For those in the “shot quality” crowd, this may be the doggy treat you are looking for. This season, Los Angeles is sitting as the fourth best offensive team in the NHL from a shot attempt standpoint at 58.8 per 60 minutes. In terms of scoring chances, they only sit at 11th place with 26.4 per 60 minutes. That’s not great for a Darryl Sutter coached team that seems to always converts their shots into goals at such a poor rate and that scoring chance number has gotten worse since the beginning of March. If this continues, it will be the worst the Kings have performed in that category since 2011 and they were eliminated in round one of the playoffs that season. Since that season, they have finished 10th, 10th and 6th every year since and averaging, at least, 27 scoring chances per 60 at even strength. 26.4 may not sound like a major drop-off, but considering the trends and the drastic aging of this roster, you can understand the panic that should be going on at Staples Center, no matter how great they are in puck possession. That is, if they stumble against Edmonton twice, their showdown against Calgary, Vancouver, Colorado and/or San Jose…