Four Years to the Fourth Power 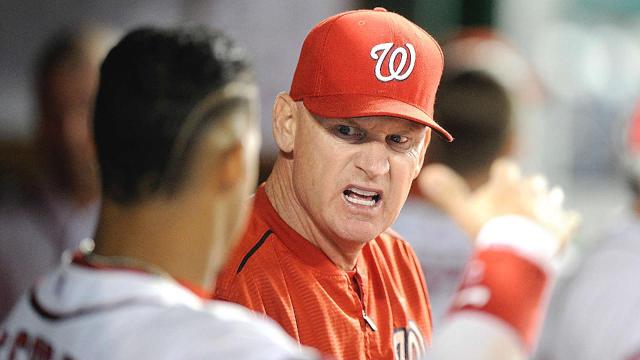 Since 2012, the Nationals have either been in the playoffs or within striking distance of making the playoffs. During that time, they have brought jubilation and, a bit too many times, heartbreak. The last three days definitely fell on the latter adjective. Here are my thoughts in 4^4 sentences.

1) Four years because you need to touch all four bases to score a run in baseball, but also…

2) Four years of seeing a poorly run ball club getting screwed over by Jeffrey Loria (aka Daniel Snyder’s long lost twin) turn into what should have been the most well run club in baseball.

3) Four years of seeing a vacant lot that should have had a building there but didn’t because of the 2008 recession, turn into one of the better pregame and postgame areas in Major League Baseball…

4) Only to see the news that it will be removed at the end of those fours years.

5) Four years of seeing the Navy Yard become one of the improving neighborhoods in the city thanks to the ballpark and the baseball team.

6) Four years of still having the team’s shared television rights dispute struggle mightily to be settled in court.

7) Thus, four years of not knowing what our player spending budget should be during these supposed World Series runs

8) Four years of reminding everyone that Peter Angelos is the worst.

9) Four years of seeing that spending budget dry up thanks to all the young talent nearing the end of arbitration.

11) Only to see Harper be the only positive in a miserable 2015 and the ghost of George Steinbrenner stopping at nothing to have him eventually wear Yankees pinstripes four years later.

12) Four years of still seething at every Phillies fan that ever thought Placido Polanco ever deserved to be an All-Star over Ryan Zimmerman in 2011.

13) Only to see the Z-man, the team’s longest and most loyal National, never make more than his only All-Star appearance in 2009…

14) And, only to see his body deteriorate so much that he can no longer play at third base, where his batting numbers were advantageous, and to see his 6 year/$96 million extension look regrettable four years later.

16) Four years of noting that three to four of those ten players I just mentioned should (Storen and Desmond)  or may (Zimmermann) never play for Washington ever again after this season.

17) Four years of noting that, at least, three of those same players may never be the same ever again because of too many injuries during that time (Werth, Zimmerman and Ramos).

18) Four years of seeing teams learn that Drew Storen never likes to throw inside the strike zone no matter what pitch he throws.

19) Four years of developing hitters that either swing for the fences or strikeout, but never play a small ball mentality for all 162 games.

20) Four years of seeing our General Manager go from a “building from within” Messiah to getting too cute too often with constructing our bullpen.

21) Specifically, four years of still feeling the sting of losing a first round pick….to the New York Yankees….for Rafael Soriano.

22) Four years of knowing that Soriano has among the slowest fastballs of any closer in baseball when he was a National.

23) Four years of giving into Jonathan Papelbon’s demands of being a closer and then taking his unnecessarily huge team option for 2016, thus having no savings to resign Jordan Zimmermann next season.

24) Which is a f#@&*!g shame, because Zimmermann has been the true warrior and leader of this ballclub for four years.

25) Only to see him leave for someone else because we gave his exact contract to Max Scherzer and can’t afford to keep both four years later.

26) In four years time, barring miracles and legally taking steroids, Scherzer will start looking past his prime and will have another two more years afterwards.

28) Four years of forever defending the Jayson Werth contract because how else could you ever convince free agents to sign to such a [then] pathetic franchise in 2011?

29) Four years of telling all those against the deal that you’re either a jealous Phillies fan that never saw your Championship window closing or doesn’t understand that Werth has only had two healthy seasons out his five in Washington; 2011 and 2014.

30) Four years of calculating that Werth’s total WAR as a National is the equivalent of a $13.02 million per year player; just four million overpaid than the 7 years/$126 million he is making right now.

32) Only to see him always get hurt or have his mechanics change left, right and center four years later.

34) Four years of watching Drew Storen turn into bad Gio Gonzalez in a third-of-an-inning span because, again, Papelbon demands to be the closer four years later.

35) Four years of constantly overrating our defense by fans and front office management….

36) …and seeing the same overrated defense get it’s infield shuffled to the least ideal position to succeed (Rendon is still at second base?!?!) four years later.

37) Four years of mentally ruining Drew Storen’s confidence off the field only to watch it get destroyed as a man without a position on the field.

38) Fours years later, Terry Collins puts Tyler Clippard out to shut the Nats in the eighth of last Tuesday’s game as the ultimate f$#@ you move to us.

39) Four years later, all Nats fans realized he should have hired Randy Knorr as manager instead of Matt Williams.

40) Four years later, Matt Williams realized five months too late how to have a short leash on starters and use their bullpen on high leverage situations.

41) Four years later, fans find new ways to criticize him because he told a red hot Anthony Rendon to sacrifice bunt while trailing in the bottom of the ninth.

43) Four years of thinking that Ramos is our catcher of the future.

44) Only to see him 26th amongst all Major League Catchers in WAR four years later.

45) Four years of seeing Nats fans put all the chips poured in on Michael A. “Jackson” Taylor basket.

46) Four years of reminding them that his on-base percentage is the outfield equivalent of Desmond.

48) Only to see a few of them having to be recalled this year.

49) Four years of hating and having to take down the established Atlanta Braves.

50) Only to see a Bernie Madoff-affected New York Mets team leapfrog over us four years later.

51) Four years of watching Danny Espinosa slug like he could have been the next Chase Utley.

52) Only to see him strikeout his way out of any starting lineup spot on any Major League roster four years later.

53) Four years of having to hear it from nearby Orioles fans that they are much more loyal fans.

54) Only to see that attendance in their ballpark is much smaller when having the same amount of success as the Nationals four years later.

56) Only to see it ruined by tactical naivety by Matt Williams four years later.

57) Four years of expecting this baseball team to finally put an end to a city-wide 23-year title drought.

59) Four years of seeing Sports Illustrate be all lovey-dovey with Philadelphia’s title drought, yet never write anything about DC’s.

60) Because it has been four years of people from the outside time and again ridiculing our fans for entering late and leaving early.

61) Forgetting that time and again, Washingtonians can only use the biggest cesspool in human history that is the Metrorail system to get to anything in this city on time.

62) Four years of demanding that DC gets treated like a big market city.

63) Four years of understanding that firing Matt Williams immediately after this season is, for now, the ONLY way this city gets any form of respect as a “big sports market” because Boston, Philadelphia and New York would do such a thing in their sleep.

64) In short, four years of wqinwfeunewbfuerwbfubeiuvbaeirubszuvewfuhsoirgniusebiufhwoaw!!!!!