Week 20 of the Nerdy 30: Staal’d out and Recovering from the Blues 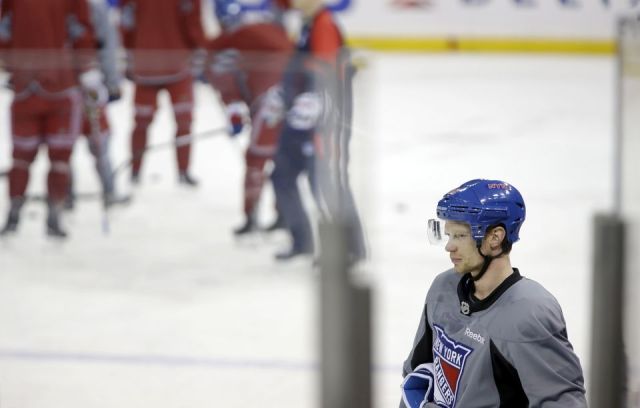 Another year, another overrated trade deadline.

That’s how it’s been for me every trade deadline Monday for me. But hey, at least it was a good way to spend my leap day!

In all seriousness, the level of commitment for teams to make a trade throughout the NHL has turned to flat out timid, and it has resulted in a lot of factors. First, the salary cap time and again struggles to increase after so many years after the 2005 lockout of great growth. From 2005 to 2012, the NHL salary cap has increased at a rate of $3.61 million per year. Since then, that value has only gone up at a rate of $1.78 million per year (this is excluding all the weird financial loopholes from the 2013 lockout season).

With the new television contract with Rogers Sportsnet in December 2014, there was plenty of hoopla suggesting that the salary cap could go as high as even $90 million within the next handful of years. Instead, Rogers’ ratings have plummeted miserably from either poorly rated coverage the likes of which only ESPN can make worse or the fact that all Canadian NHL teams might miss the playoffs this year. Either way, this is another black eye towards commissioner Gary Bettman, whether it is his fault or not, that is seeing his hardcourt counterparts begin next offseason with a television deal that has been working for them that describing this free agency as “bananas” could be the understatement of the sporting year.

Add the ever decreasing Canadian dollar in the mix and you have yourselves a recipe for a miserable salary cap, and thus miserable free agency and trade deadline periods. Until then, let’s hope we get more fun the rest of the way this NHL regular season. Speaking of Canadian teams performing badly, Montreal is finally knocked out from the rankings as we delve into the latest edition of the Nerdy 30.

We go from one team that is having a terrible time accepting who they are as an NHL club to another. The New York Rangers have been decaying naturally since their trip to the Stanley Cup Finals and there has been little they can do to stop it. The current crop of talent, as well as the ethos of owner James Dolan has been in “win now” mode since 2012 and it may be time to see a complete overhaul.
Therefore, I’m completely fine for the Rangers getting Eric Staal. While he may be a terrible shooter, Staal still finds a way to generate shot attempts better than the vast majority of his peers that have gotten as much playing time as him in the analytics era [link]. Along with that, Staal’s love affair for getting to the front of the net is better than it ever has been. According to sportingcharts.com, Staal’s average shot distance of 22.02 feet is the closest it’s ever been in any season since data has been recorded for that. Still, shots are not making it to the net as his 2.5 per game is the lowest per game rate since his rookie year in 2004.
Either way, the Rangers are abysmal on both sides of the rink this season and only have the alien himself, Henrik Lundqvist, to thank them for not being so awful at five-on-five. Honestly, the Rangers will come in to these playoffs as the worst metropolitan team no matter what. If they even progress beyond the first round, New York would already have won the Eric Staal trade. It’s just a matter of how old the star player is going to look now that he is 31 years old.

For the exception of adding Anders Nilsson as injury cover for Brian Elliott, who’s out for four weeks to a lower body injury, the St. Louis Blues really didn’t do anything at the trade deadline. Honestly, that’s ok. If anything, they have already used 20 forwards this season, and if Nilsson plays in goal, another five goaltenders would have been used as well. Not a single defenseman has played the full 66 games this season for St. Louis and only David Backes and Troy Brouwer have been able to accomplish this feat in the forwards department. Now, Alexander Steen is out with a left arm injury and Jori Lehtera has been missing a few games after taking a puck to the face in last week’s game against the Rangers.

With all that said, they are still an above 50% possession team that could use a little more puck luck offensively and are neck and neck with Dallas and Chicago for first place in the Central Division. Many teams would have folded and accepted fighting for a playoff spot, but that’s not head coach Ken Hitchcock’s M.O. If anybody in Missouri even dares firing him this offseason, please remember this time period and realize what would have happened if the Blues made excuses with their run of injuries.

If anything, it has forced Hitchcock to play Robby Fabbri more than he would have liked and the 20-year old rookie has been delivering; averaging almost a half-point per game and delivering good puck possession while teaming up with Lehtera on the team’s scoring line. Now Jaden Schwartz is starting to get more playing time and has gotten off to a great start with 13 points in 17 games. When Lehtera, Steen and Elliot returns, St. Louis can finally be a hockey team at full strength. Until then, we can only dream how far this team can survive in the playoffs.

Yeah, don’t look now, but Anaheim is good. As in “cup contender” good!

If you have been following the Nerdy 30 all season, you have noticed how it has not been smooth sailing for head coach Bruce Boudreau’s hockey team. If anything, Anaheim has acquired four new mainstays at forward as a result of the Shawn Horcoff suspension and with Chris Stewart placed on injured reserve. All season, Anaheim has relied on it’s top two lines at forward to get the job done. Whether that’s the top line of Corey Perry, Ryan Getzlaf and “insert name here” or the shutdown line of Ryan Kesler and Jakub Silfverberg, those two tandems have been the most consistent together all season. Coming into the new year, Carl Hagelin was used as the third forward on the effective Kesler-Silfverberg line.

Instead, David Perron has replaced Hagelin and while the latter did not have a terrible tenure from a possession standpoint, his scoring left lots to be desired, even if he did catch the syndrome of bad on-ice shooting luck. This has led to Boudreau moving Andrew Cogliano up to the second line while either David Perron or breakout star Ricard Rakell lead the score-first third line.

What will be important for Boudreau coming into the playoffs is to organize the rest of the bottom six forward groups in the best way possible. Ryan Garbutt has come in to replace Jiri Sekac and Nick Ritchie now has the chance to get additional playing time after being picked 10th overall in the NHL draft two years ago. Nate Thompson has also returned from a long injury spell and Jamie McGinn and Brandon Pirri have been newly acquired at the trade deadline, too. Either way, there’s some interesting pieces at the table here. Is it enough to surpass the Los Angeles Kings to top the Pacific Division and make it to the conference finals?