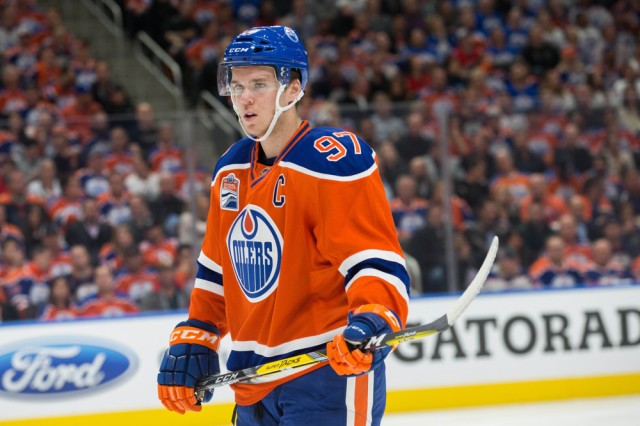 With 15 days of the NHL season past us, you would think that the same storylines will be delivered this year as they were last year. After all, there really were not any ground breaking moves during free agency that would change the complexion of the league or that somebody brand new would break out and become a possible Stanley Cup contender.

Boy was I wrong! From opening night, the theme of this NHL season so far has been dictated by the youthful exuberance of so many rookies and teenagers throughout the league. And boy do we need it. When the league returned to regular season play from its first lockout under commissioner Gary Bettman, not only did the salary cap and plenty of rule changes make the sport better as a whole, but the entire 2003 NHL draft class, Alex Ovechkin and Sidney Crosby helped us get introduced to a new wave of hockey. In the years that followed, many stars from the 2006 to 2010 classes have brought a handful of generational talents (Jonathan Toews, Claude Giroux, Phil Kessel, Patrick Kane, Jamie Benn, Steven Stamkos, Patrick Kane, Steven Stamkos, Drew Doughty, Erik Karlsson, John Tavares, Tyler Seguin and Vladimir Tarasenko to name a few).

Afterwards came a three year stretch where either the best players in each draft class were only good enough as role players or not good enough to carry their teams to the playoffs all on their own. That could change over time, but from what’s been seen, all these players are getting closer towards the magic age 24-25 season where it’s almost time to know exactly what their ceilings are. With that came a sense that the best players in the NHL were always the same guys every year. Bluntly, it was just starting to get a bit stale. That wasn’t until Florida became the breakout team of last season and the world was beginning to know who Aaron Ekblad is. Along with that, despite missing almost half the season to a broken clavicle, Connor McDavid did not disappoint in his rookie campaign by putting up some numbers we haven’t seen from a teenager since Crosby and Ovechkin. This year, Austin Matthews and Patrick Laine are getting in on the fun by already recording multi-goal games. Boys, you are aware that you haven’t finished your 10-game tryout, right?! In all seriousness, there has never been a sense that the NHL has been this fresh and this new in a long time and it’s great to take a look at so many different storylines than in previous years.

So the start of this year’s run of Nerdy 30s begins by taking a look at teams that display some futures all across the board.

We start with a Central division team that is lead by a smiling Finish player and plenty of prospects that are becoming NHL mainstays. Even though Patrick Laine’s hat trick and his four goals and six points in six games have been a revelation, Jacob Trouba still hasn’t been signed to a new contract yet. Until then, Winnipeg should be a poisoned franchise because it is ridiculous that you don’t have one of your most important pieces not playing.

It shouldn’t come down to this at all. 23-year old Mark Scheifele has also become one of the best players on the team and Nikolaj Ehlers is partnering really well with Matthieu Perreault on the second line to the tune of 58.3-percent puck possession in over 52 minutes of even strength play. Meanwhile, Kyle Connor has struggled to adjust on the fourth line with Alexander Burmistrov and fellow youngster Joel Armia. Head Coach Paul Maurice is trying him as a second line forward with Ehlers and Perreault to see if he can replicate his point totals from the University of Michigan last year. Lastly, Josh Morrisey has come out and been a great defenseman pairing for Dustin Byfuglien after so many years in which Byfuglien’s most common partner has been either Tobias Enstrom, Ben Chiarot or Grant Clitsome. All three partners were able to generate positive possession with Byfuglien but “Big Buff” needs another high caliber defensemean partnering him and Morrisey can be that guy.

Otherwise, it has been same old-same old for the Jets. Their puck possession is pretty solid, but their power play and goaltending are absolutely ruining any chance for them to have any success in the always miserable Central division. Connor Hellebuyck’s and Michael Hutchinson’s production has to get better than their current 88.3-percent save percentage and 16.7-percent quality start percentage or this team is going nowhere.

Even though Carolina doesn’t have any big name rookies, they are the youngest team in the NHL according to quanthockey.com. This can be seen throughout their roster as 14 of their 23 players that have suited up for the Hurricanes are 25 years old or younger. It’s an interesting collection of players as the likes of Victor Rask, Justin Faulk, Noah Hanifin and Jeff Skinner have already have played at least one full NHL season and have established themselves as assets to keep on the team for future years to come. The real question now is if anyone of them or how many of them can become elite talents.

Once again, Bill Peters is proving to be a fantastic coach in trying circumstances. Unadjusted, Carolina has the second best even strength puck possession in the NHL behind usual suspects Los Angeles and once again has a top tier penalty kill shot suppression unit. Unfortunately, Ron Francis and his infinite wisdom decided to bring Cam Ward back and make him the starting goaltender again. With him and Eddie Lack are each giving up over four goals a game and are saving less than 86-percent of their shots. I understand if Carolina’s front office didn’t feel like Alex Nedeljkovic isn’t ready, but you would think that a change in goaltending would actually make this team better. You can argue that with a little puck luck, the Hurricanes are a playoff team now. That may sound farfeched, but can anything be written in stone beyond Pittsburgh and Washington in the Metropolitan divsion? All it takes is one opportunity for this team to be great and this franchise has to start taking it to their best advantage.

Alright everyone, we need to talk about Toronto’s best player: William Nylander! Wait, what? Yes, the other top ten draft pick that’s not named Austin Matthews.

So far, the 20-year old prospect has racked up four goals and nine points in six games while racking up a team-leading 59.3-percent puck possession. Granted, Nylander is Matthews’ linemate and that’s why his numbers are so good. But let’s take a look at last year’s WOWY numbers. As you can see in the link, Nylander was usually skating with Zach Hyman, P.A. Parenteau, Colin Greening or Kasperi Kapanen. Three of those four skaters saw a two to seven (!!!) percent jump in puck possession from when they were playing with Nylander than when they were playing without him. This is just a reminder that while everyone is watching Austin Matthews rack up his point total like crazy, don’t forget the proverbial Nick Backstrom for the Maple Leafs. He’s apparently a good hockey player.

Deep Breath…ok…Edmonton might be pretty good. Ok, let’s start with this before we get too crazy with this number five ranking. First, the Oilers are fortunate beyond belief that no one beyond them and Montreal are off to Usain Bolt-like starts this season and have the potential to staying white hot. Also, the Oilers are in the Southeast Division of 2016. Are you telling me with a straight face that Arizona, Calgary and Vancouver should compete with them this season? Along with that, are you telling me with a straight face that it is guaranteed that a Jonathan Quick-less and slightly past-their-primes Los Angeles and a Randy Carlyle-coached Anaheim will finish ahead of them in the standings? That’s why they will find a way to be a possible darkhorse in the Stanley Cup playoffs and as a Caps fan, boy is life not fair.

Connor McDavid, Leon Draisaitl and Ryan Nugent Hopkins…oh my! That’s what every team in the league has to contend with their center line depth and Milan Lucic has proven to now be a driver in puck possession after so many years of not being that while in Boston.

That being said, only Patrick Maroon and Oscar Klefbom are the only non-first line forward skaters that have a positive puck possession this season and their penalty kill is in the bottom five in terms of shot suppression. Along with that, their even strength on-ice shooting percentage and PDO are also in the top five. Edmonton should be better, but are they 85 to 95 points good, or are they 95 to 105 points good? That’s the question everyone will ask all year.