The Ups and Downs of Andre Burakovsky 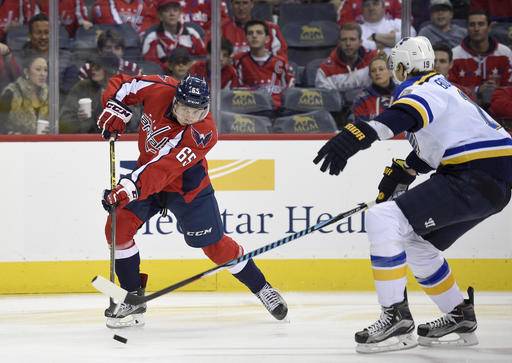 The Washington Capitals have had a challenging season so far. Plenty of players have regressed after the team put up one of the best regular seasons in its history last season. Of course, any NHL team, let alone Washington, that carries a top five ranking in PDO in one season is likely to regress towards the mean.

As a result, the Capitals are struggling for a playoff spot. Ageing veterans, like Justin Williams and Alex Ovechkin, is another one of the reasons for the team’s troubles. What’s worrisome is that the younger players have not picked up the slack at a time when they are being called upon. One of those younger players is Andre Burakovsky.

At 21 years old, the former first-round pick was expected to increase his point total of 38 points in 79 games from a season ago. Part of the reason for that was his increased playing time on the Capitals’ top forward lines, as well as head coach Barry Trotz’s willingness to give him more time on the power play.

However, despite generating great puck possession as always at above 54%, Burakovsky has only scored two goals and 10 points in 27 games. Those point totals are respectable, but his two goals were scored in Washington’s opening night game against the Pittsburgh Penguins. Along with that, Burakovsky has not recorded a point in seven straight games and has only put up four assists in his last 16 games.

As a result, Trotz made Burakovsky a healthy scratch for Friday night’s game against the Buffalo Sabres. This came after the Capitals’ loss to Tampa Bay, where Trotz threatened to make drastic changes if Washington’s production continued to perform below their standards.

So does Barry Trotz continue to have a short leash on Burakovsky? Or, is there something that shows that his game needs to improve.

One number that stands out has been Burakovsky’s 4.9 shooting percentage off of 41 shots this season. That is quite low compared to his previous conversion rates (13.8 percent and 13.5 percent) in his first two seasons in the NHL. Also, his 1.64 shots-on-goal per game is slightly better than his previous career high of 1.59 per game from last season. Still, there has to be more to Burakovsky’s goal-scoring woes than just needing a little more puck luck on his side.

All data from Corsica.hockey and hockey-reference.com

If you were to look at his season-by-season shot attempt rates, Burakovsky is generally an average or better player. What really stands out is his high level of generating all forms of shot attempts per hour (also known as his iCF60). With a career rate of 13.77 per hour, Burakovsky sits 93rd among 345 forwards that have played over 1,100 minutes of even strength time on ice since his rookie season.

However, those rankings worsen as the sample size gets smaller. Burakovsky’s individual shots on goal rate (iSF60) at even strength put him in 183rd while his scoring chance rate (iSC60) has him at 198th. Stats like these are why websites like Corsica have his all-situations career expected goal count at 23.28 in 157 games. With his actual goal total at 28, it seems like shot quality has been the main issue throughout his career.

All data from corsica.hockey and hockey-reference.com

That said, Burakovsky developed into a high-output player in the second half of last season. Not only were his shot-attempt rates hitting elite status, his shot quality increased as well. With shot-on-goal rates and unblocked attempts rates (iFF60) hitting above 9 and 12 per hour, respectively, Burakovsky was beginning to look of a top-line forward.

All data from Corsica.hockey and hockey-reference.com

During Burakovsky’s seven-game slump, he has not generated the same level of attempts as he used to. In fact, he has not attempted a single scoring chance at even strength according to Corsica.hockey. That is unforgivable for any player. Also, almost every shot-rate statistic at even strength during his last seven games are the lowest of any 10-game stretch throughout his NHL career.

Sadly, the momentum of last season has not carried over to this season. If anything, Burakovsky has reverted to his career rates if you take the five-game slump out of the equation.

So despite being 21 years old, is it time to judge Burakovsky potential? Is he the equivalent of a Justin Williams who can carry a line and produce on his own as well? Or, is he another Lars Eller; a third line, defense-first forward that can deliver above-average puck possession? Neither are bad players to emulate, but for Washington to move beyond the Alex Ovechkin-Nicklas Backstrom-era, general manager Brian McClellan has to make the best judgment for measuring Burakovsky’s career and what he can contribute to the Capitals long term. In the meantime, it would be nice to start seeing him rack up some goals and assists.