Week 8 of the Nerdy 30: Color-bad-O and a Stanley Cup Rematch? 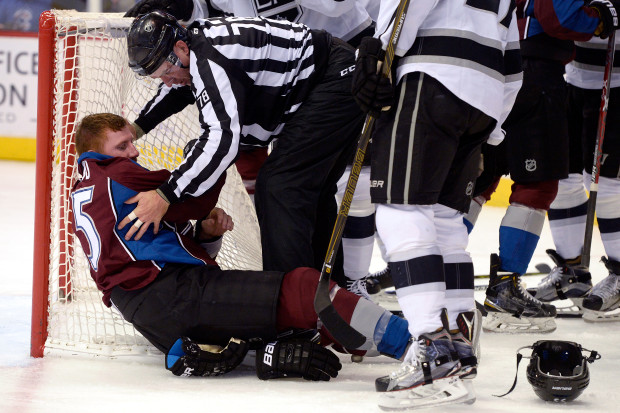 With every team playing more than one-quarter of their season, we have another team to eliminate from the power rankings. One thing that’s been pretty amazing to look at in the standings is that every team in the Eastern Conference is sitting above an 82-point pace. In other words, each team in that side of North America is averaging a shootout loss (or tie, as it was supposed to be used for) per game. That’s incredibly high when you consider that the worst teams in each conference only reaches about the 65-75 point mark. I will be curious to see if that is an all-time high if a last place team were to finish at that pace, but that is a subject for another time.

Let’s knock off another Western Conference team for this week’s edition of the Nerdy 30.

Just as soon as the Avalanche looked like a better team under Jared Bednar, injuries to Gabriel Landeskog and now Erik Johnson have put this season to rest. Even if those injuries should not hamper the chances of a Stanley Cup contender, it can’t be stated enough just how shallow Colorado’s depth in talent is across the board. At 48.2% puck possession, Bednar is moving this team on the right track, but their performance in that department needs to be another 3-6% better for them to ever be a consistent playoff participant.

With that said, Colorado’s present would once again be about looking towards their future. First round pick Tyson Jost was selected by team Canada at the World Junior Championships. At 17 points in 16 games, the University of North Dakota forward could be ready next year to play in the NHL. Along with that, J.T. Compher, the only forward in the famous “CCM line” from last year’s University of Michigan team to have not become an NHL regular, should be able to get many games the rest of the way after getting off to a tremendous start at the AHL level. Lastly, Nick Meloche could be the lone bright spot for the future in defence.

Colorado actually has drafted quite solidly over the last two seasons. Now it’s just a matter of time of being patient and not doing anything drastic or dumb via veteran player acquisitions. The latter has always been better said than done with Colorado’s front office.

In years past, head coach John Cooper has been able to keep Tampa Bay well above water if Steven Stamkos suffered a long term injury. This season hasn’t been that much of the case so far. Since the star forward left the November 15th game against Detroit with a torn meniscus in his right knee, the Lightning have now gone 4-6-1 and have only seen 46.1% of their even strength shot attempts go in their favor. That is the 23rd worst rate in the NHL during that span.

For starts, it’s not a good sign that Brian Boyle and Braydon Coburn are the team leaders in puck possession among active Lightning forwards and defensemen, respectively.  Meanwhile, Tyler Johnson and Victor Hedman are below 48% puck possession despite putting up their usual numbers. Brayden Point has been a welcome addition to the lineup in Stamkos’ and Ryan Callahan’s absence, but Valtteri Filppula and Alex Killorn continue to be mediocre in puck possession. Plenty of key pieces, including the always injured or talented but inconsistent Ben Bishop, will have to step up if the Lightning are to get back to their usual track this season.

After getting to somewhat sleepy starts, the San Jose Sharks and Pittsburgh Penguins are slowly getting back to being among the best in the NHL. Since starting the year 9-8-1, the Sharks have won six of their last eight games while Pittsburgh has now gone unbeaten in the month of December and is only bettered by Columbus with their 60.3% score and venue-adjusted puck possession.

For San Jose, among the things that needed to get better was their goaltending on the whole. Martin Jones started the season with a 90.6% save percentage and a 50% quality start percentage. During the winning streak, those numbers have improved to 94.4% and 75%, respectively.

As for the Penguins, their defense has been a sore spot for them all year. It has just been a matter of outscoring the opposition more so that not. Coming into December, Pittsburgh was being outscored 69-70 in 23 games. Since then, the Penguins have unleashed a massive 24 goals for and 11 against in four games. While a 2.75 goals against average is an improvement, that doesn’t make them elite by any stretch.

Meanwhile, San Jose has been the more complete of the two teams with a top-ten showing in both shot generation (58.1 attempts per hour) and shot suppression (53.0 attempts per hour). If they can get their 6.2% shooting percentage to a much better level, the Sharks have a clear path towards the Pacific Division title.

As for the Penguins, their path towards another Conference Finals appearance is more difficult. Columbus is not going away anytime soon, the New York Rangers still lead the NHL in expected goals for percentage despite being more than due to a regression towards an 85-90 point season, Washington is Washington, and Philadelphia is catching lightning in a bottle (yet Matt Read’s injury could make things a bit interesting for them). With Trevor Daley and Olli Maatta having terrible puck possession numbers, is it just a matter of sheltering them and, as usual, giving tons of minutes to the always injured Kris Letang? Or, does Pittsburgh stop at nothing to find an improvement at defensemen at the trade deadline? Or, is Mike Sullivan being a little too Bruce Boudreau with his systems? There are many questions to ask in Pittsburgh, but not all of them are as bad as other teams’ questions throughout the NHL.

← Week 7 of the Nerdy 30: Capped Out Capuano and Rowe-ing Above Water
The Ups and Downs of Andre Burakovsky →