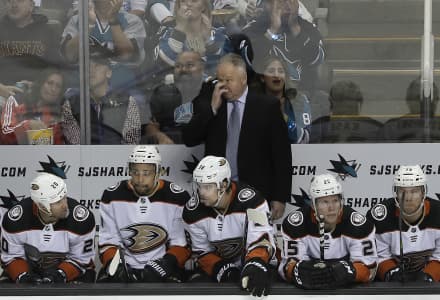 Just like that, we have the entire Pacific Division set for the second round of the playoffs. In some ways, San Jose’s 2-1 win over Anaheim showed that this series was much closer than the 4-0 sweep indicated. But then again, it was a sweep, so the gap had to have been that huge, right?

Unlike the Golden Knights-Kings series that was decided by the better of the two goaltenders, this one was decided by who had the shooting hands to get the job done from start to finish. In the end, a 16-4 combined scoreline would suggest that San Jose dominated from the word go. Even if you exclude the hilarious anomaly that is the 8-1 score from Game 3, that is still an 8-3 edge we are talking about here.

John Gibson, easily Anaheim’s best player all season long, couldn’t do better than saving eight out of every nine shots this postseason. His 50% quality start percentage is consolation for what really was a wasted opportunity to show that he has what it takes to be one of the best netminders year in and year out. But Gibson already has 178 career games and will turn 25 years old in July. More opportunities will come.

In the meantime, this could have been a complete “I told you so” post about how Randy Carlyle and this Anaheim Ducks team are the biggest frauds in the NHL. But instead, I want to point out the for all their shortcomings, this team actually played better than someone that deserved to get curve-stomped 16-4 in a week’s worth of hockey! Consider that after score adjustment at even strength (trust me, it’s needed), Anaheim was generating 60.8 shot attempts per hour. That is a massive upgrade to the 57.0 shot attempts per hour that they have generated over the 82-game regular season. One thing that might have been underestimated about this Ducks side is that their 11.4 high-danger chances per hour was actually a respectable 13th best in the NHL. Within the 16-team playoff field, that ranking looks better at 7th place.

However, San Jose was ranked 5th in the entire NHL and only bettered by Pittsburgh among playoff teams. Goals were going to come. It was just a matter of how many and by whom. Boy, did San Jose take them and, man, did Anaheim not. When all the dust was settled, the expected goal scoreline for this series was only 6.96-6.90 Sharks at even strength and 10.35-10.19 by the same team in all situations. However, that also includes an all-situations 262-258 shot attempt edge…to the Ducks. If there was one major margin of victory, it was that San Jose drew 20 penalties in the series while Anaheim only drew 12. The Sharks scored six of their 20 opportunities. The Ducks only cashed in twice. During the regular season, the Sharks were the fifth most disciplined team in the league by only committing 224 penalties. The Sharks were the fifth most penalized team in the league to the tune of 274 of them.

Add in the fact that Gibson couldn’t step up to the levels that he reached this regular season and a sweep was surely in the cards. In the meantime, Martin Jones continues to be a mastermind in the postseason. The former Kings backup netminder now owns a 93.1% save percentage and a 73.5% quality start percentage in 36 career playoff games. Compared to his career 91.5% save percentage, 58.6% quality start percentage and only a 0.169 point shares per hour in 224 regular season games, the 28-year old just continues to show how to get it done when the games count the most. Now he’ll have to go up against another big time playoff performer in Marc-Andre Fleury.

From San Jose’s side of things, it is encouraging to see their power play click without Joe Thornton against a Ducks penalty kill that can also stonewall teams with their goaltending. It just can’t be stated enough how much Evander Kane has fit like a glove for this team and long may it continue. Add in the fact that you have Joe Pavelski and Logan Couture rolling and you have a Sharks franchise full of confidence heading into round two.

On Anaheim’s side of things, they should hold their heads up higher, but only to a certain degree. All they needed to do was stay a half-foot or less onside in the third period and shoot that puck a half second earlier before the end of the second period and they could have had even a 3-1 lead instead of a 1-0 deficit in Game 4. However, the Ducks still need to realize how a few breaks here and their could have also prevented them from making the playoffs at all. Even with limited playing time, Andy Welinski and Marcus Pettersson will be the future of their blue line and they continued to get shelled like nobody’s business at even strength. In fact, they were so bad that Francois Beauchemin HAD NO CHOICE but to be the team’s third most played defenseman in the series. That’s really bad and for one of the oldest teams in the league, they better fix that problem quick, or this team will eventually hit rock bottom much faster than they expected.