Day 9 of 2018 Stanley Quips: When Nationwide is Not on Your Side 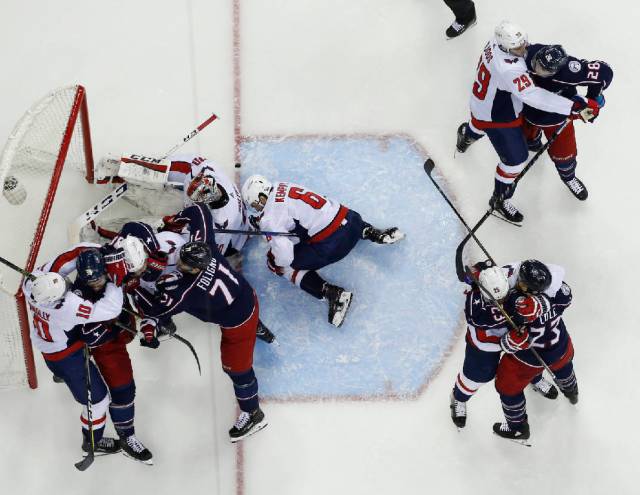 Somehow, someway, this Washington Capitals refuses to die. It’s really why us fans find a way to feel tortured every postseason. We give up hope early on. We then notice this team find a way to snatch victory from the jaws of defeat only for defeat to be snatched from the jaws of victory. It’s a broken record at this point. The Capitals just can’t have it any other way.

In 2015, Washington got destroyed in Game 1 of the Islanders series, only to see them win the series in seven games and only to see them blow a 3-1 lead to the New York Rangers in the second round.

In 2017, Washington got out twister-passed in overtime by Toronto in Game 2 and then got outplayed horrendously in Game 3 only for them to win the rest of the way and only for them to never take advantage of a Kris Letang-less Penguins team that was slowly turning into the walking wounded.

As mentioned before the postseason started, plenty of that has to do with the acquisitions of Michal Kempny and Jakub Jerabek on to the defense corps just before the trade deadline. And while their defense got marginally better (60.0 shot attempts per hour to 59.3 while at even strength) since Kempny’s acquisition, it was Washington’s mobility in attack that improved the most (55.0 shot attempts per hour to 58.3). Even the eye test can attest that they were much better offensively as the Capitals were able to score 72 goals in 22 games during that span.

Surely enough, that wave of offense has carried over to this series and I missed it dearly. Say whatever you want about Dmitry Orlov’s -3, but his 89.1 PDO is the cause of all that negativity and it his masking his unbelievable 59.1% puck possession this postseason. Also, our dude Alex Ovechkin leads all Caps in this category at 61.5% puck possession. In short, the stars have been stars with John Carlson continuing to be THE catalyst to the team’s power play as he has been all year.

I do find it to be such a massive anomaly that Carlson’s 28 power play assists are almost double his previous career high total (17 back in 2013-14), but he also hasn’t had this many shot attempts, unblocked or not, in his entire career either. And at 68 points, that just so happens to lead the entire NHL in scoring among defensemen this regular season. It’s just been amazing for Carlson to essentially supplant Mike Green at the offensive defenseman of this team, but that’s where we are in 2017-18. Long may he stay a Capital after his contract runs out this summer because boy is this team doomed to an absolute pulp if he doesn’t come back.

Lastly, I have to give credit where credit is due for Chandler Stephenson. At 23, I seriously thought his chances of becoming a full-time NHL player were grim after this season after only generating 43.8% puck possession, regardless if he had 18 points in 67 games or not. This postseason, Stephenson’s puck possession has shot all the way up to 54.3% and has been rewarded by playing on the second line in last night’s matchup. Barry Trotz’s reward for making that decision is Stephenson being the best puck possession forward in Game 4 at 61.7%. Add in the fact that he’s among the more dependable penalty killers and it is very difficult to see how he’s not a complete replacement to Jay Beagle once the latter leaves for free agency.

Oh yeah, and Braden Holtby’s back to being world class. Long may that stay that way until his final days on Earth or until the Capitals win the Stanley Cup, whichever comes first.

So there you go. A bunch of nice things to say about my favorite hockey team turning a building that has a cannon in it and a city that has my least favorite college football team into one of the quietest places over the past three days. Surely, Barry Trotz will blow this series somehow.