Day 6 of 2017 Stanley Quips: We Really Need to Talk About Barry

It’s happening again. The Capitals are facing a two games to one deficit despite being favorites to win the whole Stanley Cup tournament, let alone the series. This is not 2008, where you could argue such a young team had nowhere to go but down after being so white-hot to make it into the dance. This isn’t 2009 where the Capitals met their ultimate match in Pittsburgh. This isn’t 2010 where they never changed their league-leading systems, still looked like the same team all series and peppered the living snot out of a white-hot goaltender in Jaroslav Halak and still came up with a seven-game defeat. This isn’t 2011, where so many defensemen got hurt that SEAN COLLINS had to play in the season-ending Game four. This isn’t 2012 where Dale Hunter had to come in and make the team all too conservative. This isn’t 2013 where Adam Oates thought it was a good idea to have John Erskine as a top-pairing defenseman before Mats Zuccarello put an end to any of that ideology. This isn’t 2015 where a Conference Finals appearance should have happened if not for a horrific refereeing decision of overturning Joel Ward’s goal in Game five and for Mike Green to be in the penalty box one too many times in Game seven. This isn’t even 2016 where any human being with common sense should have known since the trade deadline that Mike Sullivan turned Pittsburgh into the fire-breathing asteroid that was going to kill everything in its path and will never make the hockey world the same ever again.

This is 2017, and good LOOOOOOOOOOOOOOORD is every part of Barry Trotz’s weaknesses showing in the worst way imaginable. This is way worse than his decision to not give younger, fresher and better skaters Andre Burakovsky and Evgeny Kuznetsov any playing time until the second round of the 2015 playoffs. This is way worse than healthy scratching Nate Schmidt in favor of Mike Weber in a decisive Game four of the Penguins series last year that had Kris Letang suspended and this is definitely worse than that same Nate Schmidt not playing another 21 more games than he should have all 2016-17 regular season.

Just take a look at this monstrosity by the great Muneeb Alam. 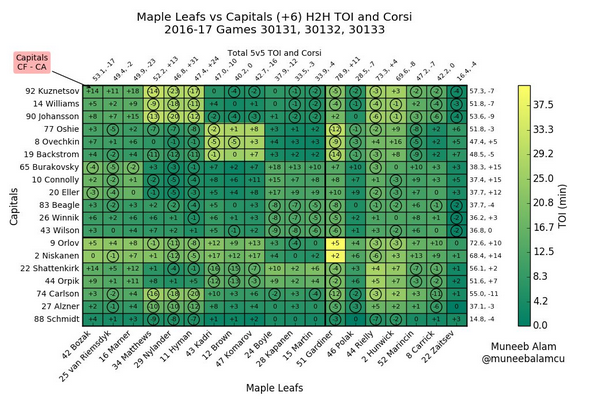 The key to the entirety of the series so far has been how well can the Kuznetsov-led second line can match up with the Auston Matthews-led trio. In Game one, this strategy actually went well to the guys from D.C. but my goodness has that gameplan gone off a cliff ever since. Via the eye test, the idea behind is to find a line and defense-pair that can go toe-to-toe with the skating mobility that Matthews and William Nylander bring. 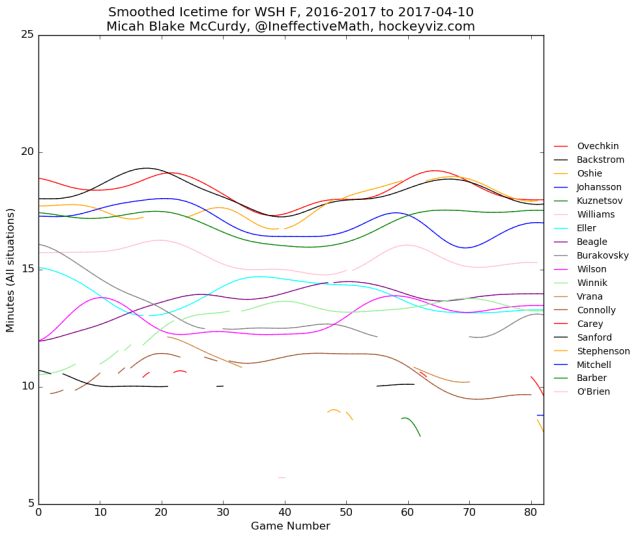 However, you have a third line that consisted of the three best puck possession forwards on the team all regular season not have any roll towards winning this series. You can clearly see that Maple Leafs head coach Mike Babcock is using his own third line led by Nazem Kadri to try and shut down the Capitals top line. Like Ian McGeechan wanted out of his British and Irish Lions forward pack in the 1997 tour against World Champions South Africa, even if parity is created in this matchup, that’s a win for Toronto because that frees the Matthews line to feast upon a much weaker opposition. That’s why it is starting to get shameful that Trotz has not placed this potential shutdown line of Burakovsky, Lars Eller and Brett Connolly significantly more than his fourth line pretty much since the February 28th trade deadline. I mean, this is the same head coach that proclaimed that you need three scoring lines to win in the NHL in 2017, right?!

With Babcock getting last change in game four, Japers Rink thought one short-term answer to Trotz’s tactics to match power with power. It’s not the worst of ideas because, if anything it will allow the Kuznetsov line to attack another mobile but less effective line led by Mitch Marner. Seriously, what’s a better visual right now than seeing Marner constantly losing his mind because he’s too busy having to defend Kuznetsov and not see the puck every shift? Along with that, you make Babcock’s third line rudderless by having them waste their time on ice defend Eller instead of Ovi.

According to Natural Stat Trick, here is how often Ovechkin is getting paired with each Maple Leafs top three centermen based on even strength time on ice during the regular season. Kadri? 27:07? James Van Riemsdyk? 6:43. Willy Nylander? 5:43. That’s right, Toronto’s third line has played more than five-fold as much ice time against Ovechkin than the “inexperienced” top line.

In the postseason, the time on ice numbers for Ovechkin against each Maple Leaf centerman has become 28:37 for Kadri, 9:46 for JVR and 5:34 for Nylander. That simply is not enough ice time for Ovechkin and his linemates to take over the series the way they should be.

Either way, this is the blogosphere proposing two game plans that are much better than what Trotz has employed at the almost-halfway point of the first round! Who looks like they know the game, now?

Take that for data!